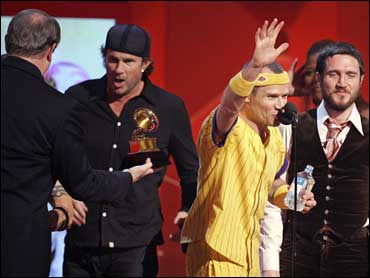 If you saw the Red Hot Chili Peppers whispering to Al Gore when they accepted their Grammy Award for best rock album in February, that's the moment they committed to playing Live Earth.

Gore said he met with band members for more than an hour before this year's televised awards show, trying to persuade them to perform at one of the concerts.

While receptive to the idea, they weren't sure they could fit the July 7 concert into their schedule, Gore said Friday.

"I was pushing and pushing them that no matter how difficult it was, that it was important," he said.

The former vice president, who lost the 2000 presidential election to George Bush despite winning the popular vote, is promoting the Live Earth concerts to raise climate change awareness.

Gore, who presented the Grammy for the best rock album with Queen Latifah, said that amid their celebration for winning the award for "Stadium Arcadium," band members "came over to me on stage and whispered in my ear: 'We're in."'

"That was the greatest place to get a confirmation that I've had yet," he said.

Organizers have also promised an event in Antarctica.