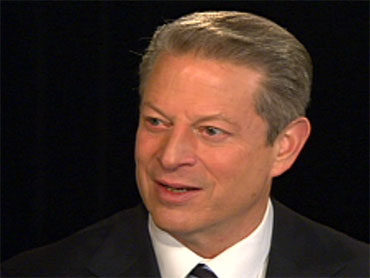 This month, a poll of 3,000 Americans showed 49 percent were not that worried about global warming. That's up from 39 percent in 2007, when Al Gore's book and documentary "An Inconvenient Truth" was the hot topic in the climate change debate.

So, does the political will to save the planet from the potential harm from global warming still exist in the U.S.?

According to Gore, who has authored a new book called "Our Choice: A Plan to Solve the Climate Crisis," the movement is rising -- not only in the U.S. but also around the world -- with people determined to solve the crisis.

Read an excerpt of "Our Choice" by Al Gore

Audio: Listen to Gore Read from "Our Choice"

"Early Show" co-anchor Harry Smith recently sat down with Gore and asked him about the environmental debate as we head into a new decade.

In the U.S., while there is more scientific agreement, there seems to be less political agreement about global warming. How does Gore view this disparity?

Gore told Smith, "Some of the largest carbon polluters have been vigorous and try to convince people -- as the tobacco industry did years ago on the link between smoking cigarettes and lung disease -- that there really isn't a link -- between global warming -- pollution and global warming. But the power of that kind of lobbying and advertising does have an impact."

Some climate models, Smith noted, say it takes a certain number of years for the environment to recover -- even if you stopped pouring carbon into the atmosphere now. So is it too late?

Gore said it's not too late, but added, "Some of the consequences are going to play out because we've already increased temperature one degree and another degree is stored up in the oceans. But the truly catastrophic effects that these scientists have been telling us we've got to stop, can still be avoided."

Smith pointed out there is an economic argument that may also be made on this issue.

Gore responded, "Even naysayers understand that it's dangerous for the United States of America to continue growing more and more dependent every day on foreign oil. (It's) controlled by sovereign governments, many of which are not friendly. ... Even a naysayer understands the value of creating of millions of good new jobs right here in the United States that can't be outsourced.

"… In fact, the climate crisis, the economic crisis and the security crisis all have a common thread running through them," Gore said. "And that common thread is our ridiculous overdependence on carbon-based fuels. If you grab that thread and pull it, all three of these crises begin to unravel. And you hold in your hand the answer, which is to switch to renewable forms of energy."

Does Gore ever miss politics?

He said he misses some things and not others.

"When I see problems like the climate crisis where the Senate is taking it on, sometimes I wish I could go down to the Senate and speak from the desk there and just hold forth," he said. "But there are a lot of things I don't miss. And I've moved on with my life. And I am enjoying spending my time and energy in an effort that feels like it's worth giving it everything I've got. And there's a fulfillment in that."

So does Gore think he ended up in the right place -- out of politics?

Gore told Smith, "You know Winston Churchill was once told by a friend after he lost an election early in his career that it was a blessing in disguise. And he said, 'Damn good disguise.'"