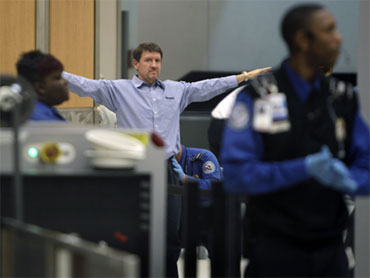 A powerful Florida congressman and longtime critic of the Transportation Security Administration is pushing for airports to ditch TSA agents and hire private contractors to handle the security screening of air passengers.

Federal law allows airports to opt for screeners from the private sector instead of the TSA. (San Francisco International Airport already does.)

As criticism grows of the government's new full-body imaging scanners and the alternative "enhanced" pat-downs, some airports are considering ditching TSA agents altogether.

This month, Republican Rep. John Mica of Florida wrote letters to 100 of the nation's busiest airports asking that they request private security guards instead.

"I think we could use half the personnel and streamline the system," Mica said Wednesday, calling the TSA a bloated bureaucracy.

Mica, who is the ranking Republican on the House Transportation and Infrastructure Committee (and, once the new Republican majority takes control in January, its expected chair), counts among his campaign contributors some of the companies who might take the TSA's place.

Companies that could gain business if airports heed Mica's call have helped fill his campaign coffers. In the past 13 years, Mica has received almost $81,000 in campaign donations from political action committees and executives connected to some of the private contractors already at 16 U.S. airports.

Private contractors are not a cure-all for passengers aggrieved about taking off their shoes for security checks, passing through full-body scanners or getting hand-frisked. For example, contractors must follow all TSA-mandated security procedures, including hand pat-downs when necessary.

Still, the top executive at the Orlando-area's second-largest airport, Orlando Sanford International Airport, said he plans to begin the process of switching to private screeners in January as long as a few remaining concerns can be met. The airport is within Mica's district, and the congressman wrote his letter after hearing about its experiences.

CEO Larry Dale said members of the board that runs Sanford were impressed after watching private screeners at airports in Rochester, N.Y., and Jackson Hole, Wyo. He said TSA agents could do better at customer service.

"Some of them are a little testy," said Dale, whose airport handles 2 million passengers a year. "And we work hard to get passengers and airlines. And to have it undone by a personality problem?"

To the south, the city's main airport, Orlando International, said it's reviewing Mica's proposal, although it has some questions about how the system would work with the 34 million passengers it handles each year.

Erickson called it a protest move in an interview.

"I am a frequent air traveler and I have experienced ... TSA agents who have let the power go to their head," Erickson said. "You can complain about those people, but very rarely does the bureaucracy work quickly enough to remove those people from their positions."

San Francisco International Airport has used private screeners since the formation of the TSA and remains the largest to do so.

The airport believed a private contractor would have more flexibility to supplement staff during busy periods with part-time employees, airport spokesman Mike McCarron said. Also, the city's high cost of living had made it difficult in the past to recruit federal employees to run immigration and customs stations - a problem the airport didn't want at security checkpoints.

"You get longer lines," McCarron said.

TSA spokesman Greg Soule would not respond directly Mica's letter, but reiterated the nation's roughly 460 commercial airports have the option of applying to use private contractors.

Companies that provide airport security are contributors to Mica's campaigns, although some donations came before those companies won government contracts. The Lockheed Martin Corp. Employees' Political Action Committee has given $36,500 to Mica since 1997. A Lockheed firm won the security contract in Sioux Falls, S.D. in 2005 and the contract for San Francisco the following year.

Raytheon Company's PAC has given Mica $33,500 since 1999. A Raytheon subsidiary began providing checkpoint screenings at Key West International Airport in 2007.

FirstLine Transportation Security Inc.'s PAC has donated $4,500 to the Florida congressman since 2004. FirstLine has been screening baggage and has been responsible for passenger checkpoints at the Kansas City International Airport since 2006, as well as the Gallup Municipal Airport and the Roswell Industrial Air Center in New Mexico, operating at both since 2007.

Since 2006, Mica has received $2,000 from FirstLine President Keith Wolken and $1,700 from Gerald Berry, president of Covenant Aviation Security. Covenant works with Lockheed to provide security at airports in Sioux Falls and San Francisco.

Mica spokesman Justin Harclerode said the contributions never improperly influenced the congressman, who said he was unaware Raytheon or Lockheed were in the screening business.

"They certainly never contacted him about providing screening," Harclerode said.