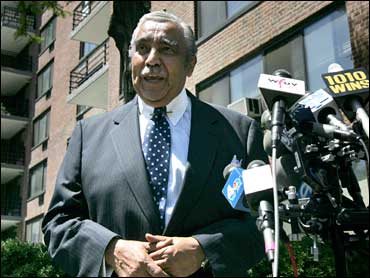 House Republican leaders demanded Tuesday that embattled Rep. Charles Rangel be removed from his post as chairman of a tax-writing committee while an ethics panel reviews his personal finances.

The GOP's latest thrust against Rangel came as his advisers acknowledged he will pay back federal, state, and city taxes for unreported rent collected on a vacation home. The episode is particuarly embarassing for a legislator with oversight of the nation's tax code, and one who has been in Congress for nearly four decades.

Rangel, D-N.Y., has been besieged for months by reports raising questions about his finances and living arrangements. In his home district of Harlem, he had four rent-regulated apartments in the same building, including one that was used for campaign work.

That arrangement was already under investigation by the House ethics committee last week when new revelations surfaced that he had an unusual financial deal for his beach vacation home in the Dominican Republic.

"You, as the speaker of the House, must insist that Rep. Rangel step down from his Ways and Means chairmanship pending an investigation of his ethical lapses," said the letter signed by Minority Leader John Boehner and his top deputies, and laced with criticism of the Democratic-led Congress.

Rangel lawyer Lanny Davis said he will not give up the chairmanship.

"Mr. Boehner's hyper-partisan attack on an honorable man, Charles Rangel, is completely contrary to the spirit of bipartisanship," said Davis.

"Of course Mr. Rangel will not step down from his chairmanship even temporarily, but trusts the bipartisan ethics committee to look into the facts, as opposed to the innuendo that apparently Mr. Boehner prefers," the lawyer said.

Rangel's lawyer has already acknowledged he had not reported some $75,000 in rental income on the property over two decades, and that for more than a decade he paid no interest on his mortgage for the property. His lawyer insists that any tax mistakes were minor and accidental.

The congressman will soon file amended tax returns paying "modest" back taxes owed for the last several years, said Davis. Initially, the lawyer said the amount could be thousands of dollars in each category but hours later backed off those figures, saying it was unclear what the amounts of taxes owed would be.

Rangel has scheduled a news conference Wednesday to discuss the controversy.

Republicans had already unsuccessfully sought to censure the congressman. Two years ago, Pelosi asked Louisiana Rep. Bill Jefferson to leave his seat on Ways and Means due to a federal criminal probe that resulted in an indictment.