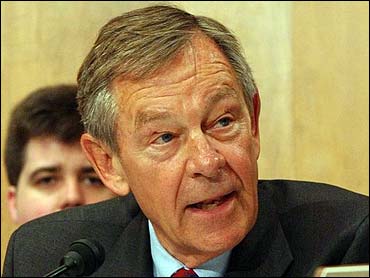 A small group of Republicans facing election fights next year have rallied around war legislation they think could unite the GOP: Call for an end to U.S. combat in Iraq, but wait until President Bush is out of office.

The Democrats on Friday deemed the legislation a "nonstarter," and underscored the difficulty Congress has in striking a bipartisan compromise on the war. What attracts Democrats has repelled Republicans and vice versa, making it impossible so far to find a middle ground.

"I don't support it at all," said Senate Majority Leader Harry Reid, D-Nev. "It doesn't do anything."

The proposal, by Sen. George Voinovich, R-Ohio, would require that Mr. Bush change the mission of U.S. troops from combat to primarily support roles, such as training Iraqi security forces and protecting U.S. infrastructure in Iraq. His legislation would set a goal of completing such a mission transition within 15 months.

If enacted immediately, that timeline would not kick in until Mr. Bush's last couple weeks in office.

"That's very courageous," Reid, D-Nev., joked when a reporter asked him Friday about the proposal.

Co-sponsors of the bill include Sen. Lamar Alexander of Tennessee, Elizabeth Dole of North Carolina and Norm Coleman of Minnesota. Of the sponsors, only Voinovich is not up for re-election in 2008.

In response to Reid's rejection, a Voinovich spokesman said the senator "will continue to work for a bipartisan, nonpolitical compromise so our nation finally speaks with one voice."

Their efforts come as the Senate wraps up debate on a $672 billion defense policy bill that would authorize more than a half trillion dollars in annual defense spending and $150 billion for the wars in Iraq and Afghanistan, including $23 billion added for Mine Resistant Ambush Protected vehicles.

The bill, on track to pass on Monday, also would make it easier for Iraqi refugees to apply for U.S. visas. An amendment by Sen. Edward Kennedy, D-Mass., adopted on Thursday would provide 5,000 special immigrant visas each year for five years; the new visas would be given to Iraqis who fear retribution because they worked for the U.S. government in Iraq.

Senate Democrats tried to attach legislation ordering an end to combat, but repeatedly failed to muster the 60 votes needed to overcome parliamentary hurdles.

Sen. Carl Levin, the Democratic chairman of the Armed Services Committee, said he worked closely with Voinovich until late Thursday in the hopes of striking a compromise proposal. Levin wants to set the goal in nine months, but acknowledges he doesn't have the votes to pass it.

"To try to put this off until after the election, rather than a reasonable period of completion, I believe would be to unnecessarily introduce a political element to what is a bipartisan effort," he said.

Voinovich, Alexander and Coleman have been outspoken critics of Mr. Bush's war strategy, citing voter frustration with what they say seems to be an open-ended military commitment in Iraq. Coleman in particular has become a popular political target by anti-war groups hoping to replace him with a Democratic candidate willing to demand troop withdrawals.

But each of the GOP senators has rejected Democratic legislation that includes a timetable for troop withdrawals, contending they do not want to tie the hands of military generals and a wartime president.

While the defense policy bill approves war spending for next year, it does not guarantee it; Mr. Bush will have to wait for Congress to pass a separate appropriations bill that actually transfers money to the military's coffers.

Democratic leaders say the recent passage of a stopgap spending bill that funds the Pentagon at 2007 levels gives the military enough money to keep the war going for a few more months. A spending bill to pay for combat through next September might not be passed until early next year, officials said.