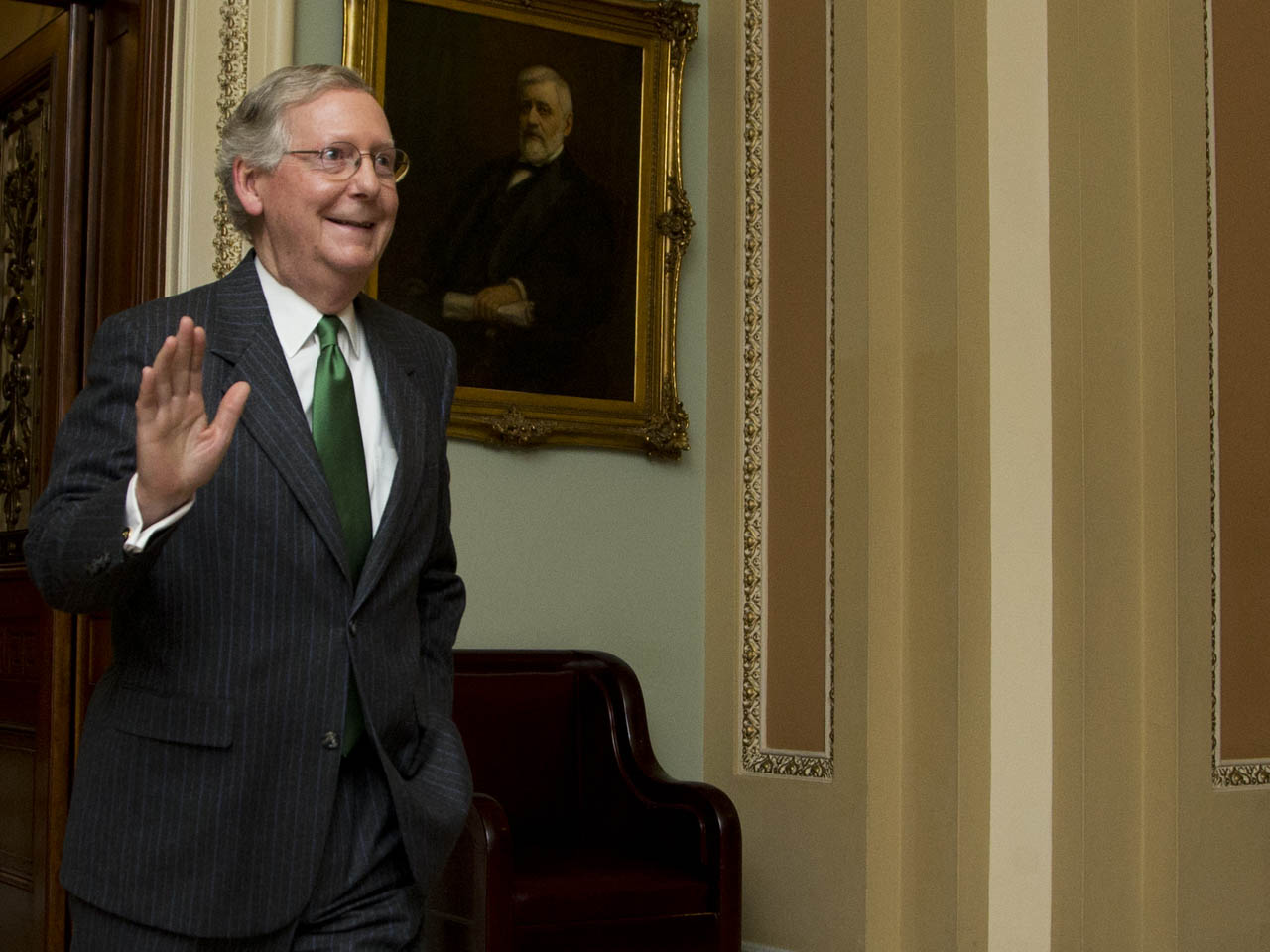 It was not clear whether the gambit by Senate Majority Leader Mitch McConnell would succeed ahead of Friday's midnight deadline to fund the department or see it shut down. It was far from certain whether it would win any Democratic support, and House conservatives remain firmly opposed to any funding bill for the Homeland Security Department that does not also overturn Obama's executive actions on immigration.

But with Senate Democrats united against a House-passed bill that funds the agency while blocking the president on immigration, McConnell said it was time for another approach.

"It's another way to get the Senate unstuck from a Democrat filibuster and move the debate forward," McConnell said on the Senate floor after a vote to advance the House-passed bill failed 47-46, short of the 60 votes needed. Three previous attempts earlier in the month had yielded similar results.

"This is our colleagues' chance to do exactly what they led their constituents to believe they'd do: defend the rule of law, without more excuses," McConnell said in a jab at the handful of Senate Democrats who have voiced opposition to Obama's executive actions offering work permits and deportation deferrals for millions in the country illegally.

A spokesman for House Speaker John Boehner, R-Ohio, welcomed McConnell's move, though without predicting its chances of success in the House.

"This vote will highlight the irresponsible hypocrisy of any Senate Democrat who claims to oppose President Obama's executive overreach on immigration, but refuses to vote to stop it," said Boehner spokesman Michael Steel.

McConnell left unclear whether a vote overturning Obama's immigration moves would be followed by a stand-alone vote to fund the Homeland Security Department - an omission not lost on Senate Democrats.

McConnell's move came after Obama warned the nation's governors that states would feel the economic pain of a Homeland Security shutdown, with tens of thousands of workers in line to be furloughed if the agency shuts down at midnight Friday, and many more forced to work without pay.

Within hours of Republicans securing the Senate majority last November, McConnell vowed there would be no government shutdowns, but the immigration fight threatened to shut down the Homeland Security Department and undermine GOP promises that they would show the nation they could govern.

McConnell's move seemed aimed at dividing Senate Democrats who have been united against the $39.7 billion House-passed legislation that funds the Homeland Security Department through the Sept. 30 end of the budget year, while also rolling back Obama's executive actions granting work permits to millions of immigrants in this country illegally.

Aides said McConnell's bill would target only the executive actions Obama announced in November, not an earlier directive from 2012 that provided protections to hundreds of thousands of immigrants brought illegally to the country as youths.

That could make it more difficult for the handful of moderate Democrats who opposed Obama's executive actions when he announced them in November to vote against the legislation.

The move came as growing numbers of Senate Republicans called for Congress to jettison the immigration fight and pass a "clean" Homeland Security spending bill without immigration language. In wake of a federal court's ruling last week stating that Obama had exceeded his authority and putting his immigration policies on hold, several Senate Republicans said the courts were the best place to fight that battle.

"Leave it to the courts. I think we have an excellent case before the Supreme Court," Sen. John McCain, R-Ariz., said Monday night.

The Obama administration on Monday asked U.S. District Judge Andrew Hanen in Brownsville, Texas, to put his ruling on hold and filed a notice of appeal of his ruling to the 5th U.S. Circuit Court of Appeals in New Orleans.

House conservatives, by contrast, said the court developments only strengthened their resolve to use the Homeland Security budget to fight Obama on immigration.

"A federal judge has confirmed that what we've done is the right thing," conservative Rep. Jim Jordan of Ohio said Monday. "I hope that the U.S. Senate can see the light and do the right thing."

A short-term extension of current funding levels remained possible, but lawmakers have only a few days to come up with even that partial solution before the agency's funding expires.

A Homeland Security shutdown would result in some 30,000 administrative and other workers getting furloughed. Some 200,000 others would fall into essential categories and stay on the job at agencies like the Border Patrol, Secret Service and Transportation Security Administration, though mostly without drawing a paycheck until the situation is resolved.