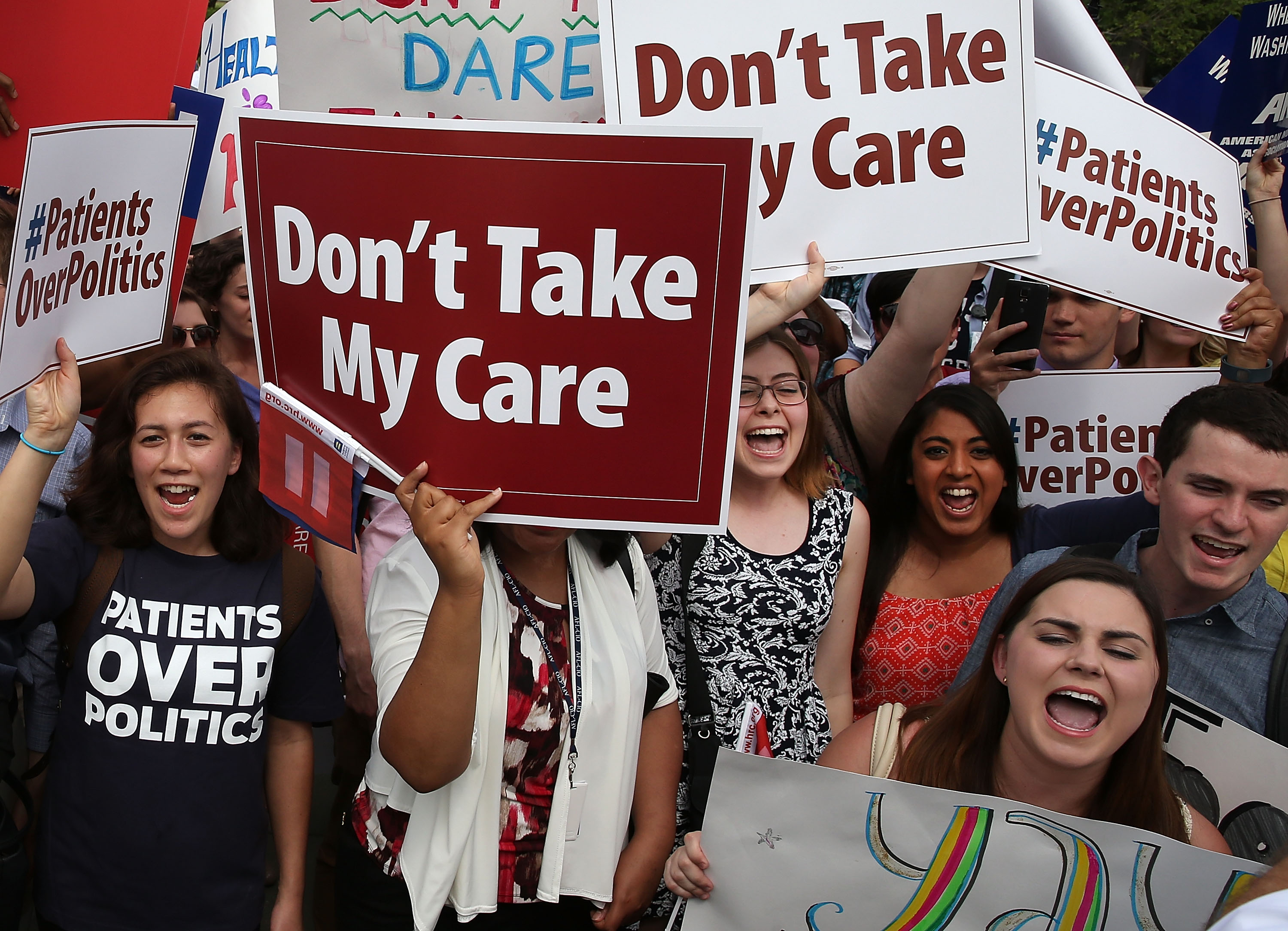 Republicans reacted furiously on Thursday after the Supreme Court upheld a major portion of Obamacare, accusing the justices of legislating from the bench and stressing the importance of electing a Republican president in 2016 to undo the law.

Former Arkansas Gov. Mike Huckabee, who's running for president in 2016, labeled the decision an "out-of-control act of judicial tyranny" in a tweet.

"Our Founding Fathers didn't create a 'do-over' provision in our Constitution that allows unelected, Supreme Court justices the power to circumvent Congress and rewrite bad laws," he added in a statement. "The Supreme Court cannot legislate from the bench, ignore the Constitution, and pass a multi-trillion dollar 'fix' to ObamaCare simply because Congress misread what the states would actually do."

In a 6-3 ruling, the justices decided to preserve health insurance tax credits for Americans in all 50 states, rebutting the argument that only consumers in states that established their own insurance exchange were eligible for the subsidies. Only 14 states opted to set up their own marketplace to sell insurance under Obamacare, and 36 states used an exchange set up by the federal government.

The case represented perhaps the last best opportunity for opponents of the law to undermine it through the judiciary. Republicans seeking to undo the law are now pinning their hopes on the 2016 presidential race, and the possibility that a GOP president, with a Republican Congress, could repeal the law outright.

"Today's ruling makes it clear that if we want to fix our broken healthcare system, then we will need to elect a Republican president with proven ideas and real solutions that will help American families," said RNC Chairman Reince Priebus in a statement.

Some Republicans pointed to the text of the law, which stated that tax credits could be offered only to people who purchase insurance through an exchange "established by the state." The court, though, ruled that the law's authors never intended to deny subsidies to people buying insurance through the federal marketplace.

GOP presidential hopeful and former Texas Governor Rick Perry said the Obama administration "ignored the text of the Affordable Care Act time and again, and today's ruling allows them to continue to disregard the letter of the law."

"While I disagree with the ruling, it was never up to the Supreme Court to save us from Obamacare," Perry said. "We need leadership in the White House that recognizes the folly of having to pass a bill to know what's in it."

Florida Sen. Marco Rubio, another 2016 candidate, said in a series of tweets that he disagrees with the justices' ruling and believes "they have once again erred in trying to correct the mistakes made by President Obama...and Congress in forcing ObamaCare on the American people."

"Despite the Court's decision, ObamaCare is still a bad law that is having a negative impact on our country and on millions of Americans," he added. "I remain committed to repealing this bad law and replacing it."

Republican congressional leaders were dismayed by the ruling as well.

"ObamaCare is fundamentally broken, increasing health care costs for millions of Americans," said House Speaker John Boehner, R-Ohio, in a statement. "Today's ruling doesn't change that fact. Republicans will continue to listen to American families and work to protect them from the consequences of ObamaCare."

Democrats in Congress, many of whom helped pass the law, commended the Supreme Court's decision.

"This is a victory for common sense and for all American families. It is long past time for Republicans to abandon their assault on the newfound health security that the Affordable Care Act is providing millions and millions of Americans across the country," said House Minority Leader Nancy Pelosi, D-California, in a statement. "The Court's decision ensures that all eligible Americans, regardless of their home states, have the access to premium tax credits to afford life-saving health care."

And Hillary Clinton, the Democratic frontrunner in the 2016 race, welcomed the ruling in a tweet:

Yes! SCOTUS affirms what we know is true in our hearts & under the law: Health insurance should be affordable & available to all. -H