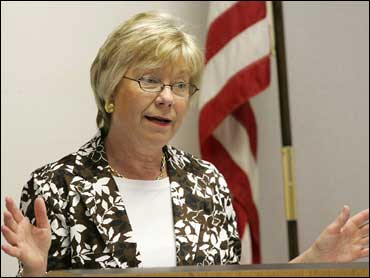 Republicans who were once cozy with President Bush are distancing themselves from both the president and their party in campaign ads.

Consider Rep. Deborah Pryce, the fourth-ranking House Republican struggling to hold onto her seat in an evenly split district in central Ohio, near Columbus.

In 2004, her campaign Web site featured a banner of her and Bush sitting together, smiling. But in her latest television ad, Pryce is described as "independent." The spot also highlights how she "stood up to her own party" and the president to support increased federal funds for embryonic stem-cell research.

As chairwoman of the House Republican Conference, Pryce rallies colleagues to the party message.

With the election in about two months and Bush's approval ratings still low — 33 percent in the most recent Associated Press-Ipsos poll — Republicans involved in tight races are avoiding party labels and playing down their ties to the president. On issues from the Iraq war to Amtrak spending, GOP candidates are trying to argue that they don't follow in lockstep.

Among some of the ads:

In Pennsylvania, Republican Rep. Jim Gerlach tells voters: "When I believe President Bush is right, I'm behind him. But when I think he's wrong, I let him know that, too." Gerlach is in a close contest with Democrat Lois Murphy, who nearly beat him in 2004.

In Minnesota, where an open Senate seat is at stake, Republican Rep. Mark Kennedy has an ad titled, "Crossing Party Lines," in which he says: "I'm a Republican. On issues like taxes and spending, I vote like it. But on other issues, I cross party lines." In 2002, in his run for the House, a Kennedy ad showed him walking and shaking hands with Bush at the White House. Today, he lists the issues on which he has split from the president.

In South Florida, heavily populated by retirees, Republican Rep. Clay Shaw criticizes the president's stalled plans to change Social Security and says in his ad, "I represent the state of Florida, not a political party."

Ed Patru, a spokesman for the House Republican campaign committee, shrugged off the latest ads.

"That's nothing new, that's just being a smart campaigner," said Patru, who argued the candidates were reinforcing the moderate positions that have helped them win in swing districts.

Democrats, naturally, have a different view.

"What we're seeing is a number of candidates who embraced Bush in previous elections are now treating him like a leper," said Phil Singer, spokesman for the Senate Democratic campaign organization.

"In most congressional races the conventional wisdom is it's all local," Iyengar said. "But every now and then, it is possible to nationalize these races, and I believe all the stars are in place for that in 2006."

New Mexico pollster Brian Sanderoff, who is closely watching the re-election campaign of Rep. Heather Wilson, a moderate Republican, said that as the president's approval ratings drop, "incumbents are becoming even more clear in expressing their independence or distance from the White House."

In Pennsylvania, Republican Sen. Rick Santorum, No. 3 in the GOP Senate leadership, has stood with the president on scores of issues, from abortion to same-sex marriage to taxes. Trailing his Democratic challenger Bob Casey in the polls, Santorum brags about breaking with the administration on Amtrak money.

"And the White House probably called me a lot of things when I fought their efforts to cut Amtrak funding," Santorum says.

Another vulnerable Senate incumbent, Ohio Republican Mike DeWine, has welcomed the president for two events that raised $2 million. Yet his ads have touted his independence and ability to work with Democrats.

In Missouri, Republican Sen. Jim Talent's first ad of 2006 said: "Most people don't care if you're red or blue, Republican or Democrat ... They care about getting things done."

Talent's opponent, Democrat Claire McCaskill, argues that Talent is trying to "reinvent himself" from 2002, when an ad showed Bush praising Talent.