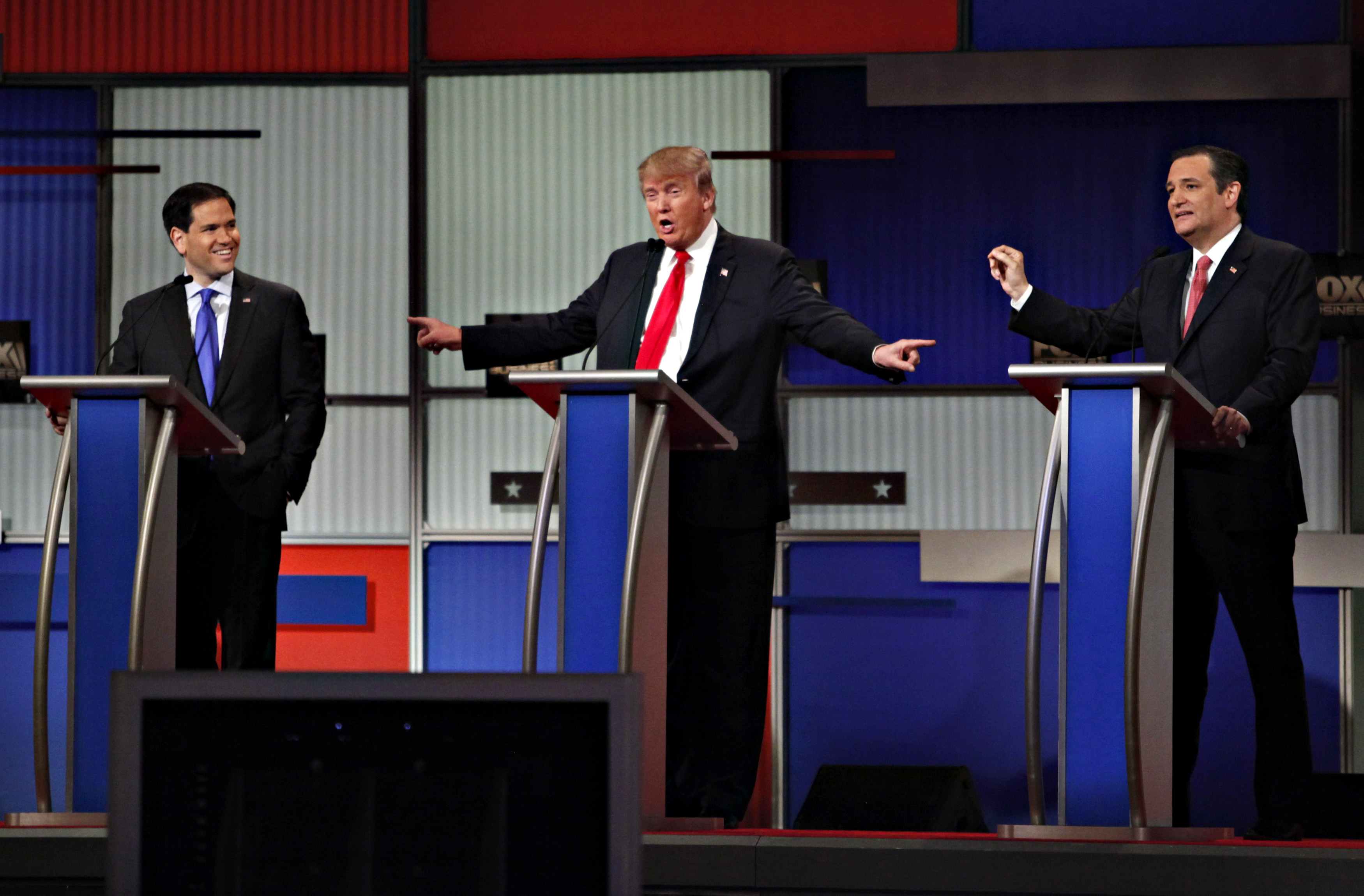 While some are celebrating Iran's release of five American prisoners, at least two Republican presidential contenders are warning that the deal may not be to the benefit of the United States.

But Texas Sen. Ted Cruz -- who has leapfrogged over the GOP pack in Iowa just two weeks before the caucuses on Feb. 1 -- wrote in a tweet that while the reports were cause for celebration, there were "[s]urely bad parts of Obama's latest deal":

The prisoners, including Washington Post journalist Jason Rezaian and Idaho pastor Saeed Abedini, were released from prison in return for the U.S. offering clemency to seven Iranians who have been convicted or are awaiting trial in the U.S. for violating sanctions on the Middle East country. A fifth American, Matthew Trevithick, is also set to be freed by Iran authorities.

Later, during a South Carolina campaign stop, Cruz again cautioned that there could be "some problematic aspects" to the prisoner swap.

"I want to start with words of thanksgiving. We have just gotten the news that Pastor Saeed and three other Americans are apparently coming home from Iran. And I simply say praise God," Cruz told reporters. "We don't know the details of the deal that is bringing them home. And then it may well be that there are some very problematic aspects to this deal. But at least this morning, I am giving thanks that Pastor Saeed is coming home."

He added, "it is far later than it should have been, but we will be glad to welcome him home with open arms."

On Saturday, Florida Sen. Marco Rubio was cautious about commenting on the deal, saying he did not want to weigh in on "reports that are not yet confirmed."

But Rubio did not hesitate to slam negotiations with Iran, pointing out that the reported prisoners released "should have never, never been there in the first place."

"None of them did anything wrong," Rubio told reporters Saturday at a Johnston, Iowa, event. "And we should not be involved in swaps. These things should never happen is my point."

He went on to criticize President Obama and his administration for encouraging these types of situations: "The fact of the matter is that this tells us all that we need to know about the Iranian regime. That they take people hostage in order to gain concessions. And the fact that they can get away with it with this administration is one of the reasons."

"I think this has created incentives for more governments to do this around the world," Rubio continued before referring to the 2014 swap that freed American soldier Bowe Bergdahl from the Taliban in Afghanistan. "When you do deals like the Bergdahl deal and other things you incentivize people to take American hostages and other things even if they did nothing wrong."

New Jersey Gov. Chris Christie seconded these sentiments during a town hall in Iowa on Saturday, saying he was "grateful" for the release but concerned over the "trade" made by the White House.

"When this president makes trades this is a big problem. This is not a guy I would let negotiate buying a car for me let alone anything else," Christie said. "The fact is that we shouldn't have to trade anything to get our citizens back home. They were taken illegally by a rogue regime of Mullahs over in Iran...So we have to be grateful that those folks are being sent home but we also have to scrutinize what this president gave away in the process."

Donald Trump, during a rally in Portsmouth, New Hampshire, called it a "disgrace" that the American prisoners had been held in Iran for so long in the first place.

"I'm happy they're coming back. But I will tell you, it's a disgrace that they've been there for so long. It's a disgrace. Remember that. A total disgrace," Trump said Saturday.

The real estate mogul said that the specifics of the deal didn't seem advantageous to the U.S.

"Somebody said they're getting seven people back. So essentially, they get a $150 billion plus seven and we get four," Trump said, making a reference to the billions in sanctions relief that is set to take effect once the Iran nuclear deal is implemented. "Doesn't sound too good."

Arkansas Gov. Mike Huckabee echoed Trump's sentiments during a South Carolina tea party convention, saying that while "it's great" that the prisoners have been freed, "they should've been released before we ever sat down at the negotiating table."

Former neurosurgeon-turned-politician Ben Carson said in a statement that he too was "very pleased" over the release of the Americans.

But Carson criticized the president for the nuclear agreement, calling it "fatally flawed" and "gravely jeopardizes the national security interests of the American people." He promised Saturday that if he were elected to the White House, he would "withdraw from this dangerous agreement on Day One."

Kentucky Sen. Rand Paul, meanwhile, did not slam the president, instead praising his administration for not waiting "idly by" as Americans suffered in Iran.

"Our prayers have been answered today, as Pastor Abedini will return home to his wife and children in America. Pastor Abedini is an incredibly brave man for risking his life for his Christian beliefs and I am pleased that our government did not sit idly by while an American citizen was persecuted abroad due to religious intolerance," Paul said in a statement. "The United States stands as a beacon of freedom and hope for those across the globe, and as such, we must continue to fight for the safe return of those wrongfully imprisoned abroad based on their religious beliefs."

Democratic presidential front-runner Hillary Clinton was "greatly relieved" by the return of American prisoners, but cautioned that "we shouldn't thank Iran for the prisoners or for following through on its obligations."

"These prisoners," Clinton said in a statement, "were held unjustly by a regime that continues to threaten the peace and security of the Middle East."

Still, she greeted with open arms the "full implementation" of the landmark Iranian nuclear deal, which she called "an important achievement of diplomacy backed by pressure."

"Implementation marks an important step forward in preventing Iran from obtaining a nuclear weapon," Clinton said Saturday after the administration announced it would lift sanctions.

"This good news shows that diplomacy can work even in this volatile region of the world," Sanders said in a statement Saturday.