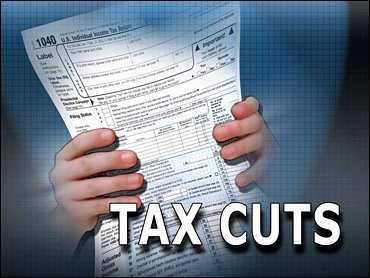 Senate Republicans are heading toward a clash with the House GOP over how deeply to cut taxes and benefit programs like Medicaid over the next five years. First, they must fend off Democrats trying to alter their plan.

Like the $2.57 trillion House plan, Gregg would shrink record federal deficits over the next five years by trimming domestic spending while cutting taxes and buttressing defense and anti-terrorism efforts.

Democratic senators readied long-shot amendments boosting funds for Medicaid, schools and other programs and paring back tax cuts for the rich. Also possible were efforts to require budget savings to pay for future tax reductions, and to erase a provision opening Alaska's Arctic National Wildlife Refuge to oil drilling.

On Wednesday, the House Budget Committee approved its budget by a party-line 22-15 vote.

At both panels' meetings, Democrats criticized Republicans for budgets they said would hurt the poor, students and others. They said deficits would be worse than the GOP was projecting because their plans were omitting the costs of wars in Iraq and Afghanistan beyond 2006, easing the alternative minimum tax's effect on middle-income earners, and Mr. Bush's goal of reshaping Social Security.

Gregg said his budget was "not a radical proposal" and merely slowed the growth of some benefit programs. The $14 billion in five-year savings from Medicaid, which helps the poor and disabled pay for health care, would come over a period when the program is expected to grow steadily and spend $1.12 trillion.

"Our current course is unsustainable," Gregg said. "The sooner we act, the less painful the choice will be."

Overall, Gregg's plan requires other Senate committees to write bills by June carving $32 billion in savings from Medicare, student loans, farm programs and other benefits over the next five years. Reflecting the House's more conservative tenor, its budget calls for $69 billion in such savings, nearly $20 billion more than Mr. Bush proposed.

The Senate budget also orders $70 billion in five-year tax cuts and gives them a procedural shield from filibusters — delays that can kill a bill unless 60 of 100 senators vote otherwise. The House plan gives such protection to $45 billion in tax cuts, but House leaders say they plan to produce the full $106 billion Mr. Bush wants in tax cuts.

The full House and Senate plan to vote on their budgets next week. In April they will try to craft a compromise that eluded them last year because of a tax-cut fight that produced a stalemate.

The House budget did not specify where the benefit reductions would come from. But based on the House committees assigned to find the savings, the Medicaid program for the poor and elderly could be targeted for up to $20 billion in five-year cuts — more than double Mr. Bush's plan — plus other reductions for student loans, welfare, farmers and veterans.

By law, benefit programs grow automatically to cover inflation and population growth. While overall spending for these programs would grow under the GOP budgets, growth would be slowed through lower benefits, lower payments to providers or smaller numbers of recipients served.

Both budgets would hold domestic programs except benefits to just less than last year, with decisions on specifics to be made later. They would push Pentagon spending to $419 billion, growth of 4.8 percent, with a smaller increase for anti-terror programs at home.

Following last year's record $412 billion deficit, the House projects a 2006 shortfall of $376 billion and the Senate a $362 billion gap. Both chambers claim to meet Mr. Bush's goal of halving the deficit by 2009, though their starting point is Bush's overestimated 2004 shortfall of $521 billion.

The two chambers see deficits dipping close to $200 billion by 2010. That is the last year covered by both plans, just as the baby boom retirement is expected to start driving shortfalls higher again.