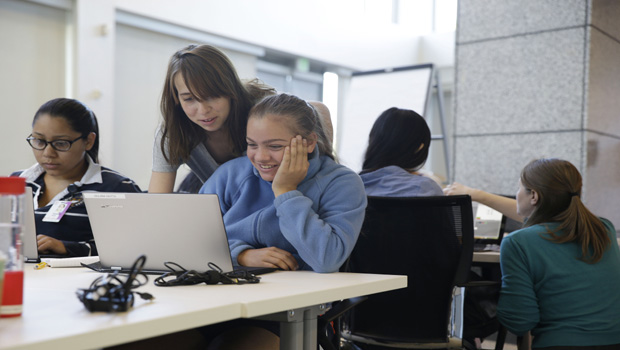 Diana Navarro loves to code, and she's not afraid to admit it. But the 18-year-old Rutgers University computer science major knows she's an anomaly: Writing software to run computer programs in 2014 is - more than ever - a man's world.

"We live in a culture where we're dissuaded to do things that are technical," Navarro said. "Younger girls see men, not women, doing all the techie stuff, programming and computer science."

Less than one percent of high school girls think of computer science as part of their future, even though it's one of the fastest-growing fields in the U.S. today with a projected 4.2 million jobs by 2020, according to the federal Bureau of Labor Statistics.

This week Google, with a driverless car and Web-surfing eyeglasses under its belt, has given The Associated Press an early look at how it's trying to change the gender disparity in its own workforce, and in the pipeline of potential workers, by launching a campaign Thursday called "Made with Code."

The initiative begins with an introductory video of girls - silly, serious and brave - meeting President Obama, painting over graffiti and goofing around. The narrator says: "You are a girl who understands bits exist to be assembled. When you learn to code, you can assemble anything that you see missing. And in so doing, you will fix something, or change something, or invent something, or run something, and maybe that's how you will play your bit in this world."

A website features female role-model techies who write software to design cool fabrics or choreograph dances. There are simple, fun coding lessons aimed at girls and a directory of coding programs for girls. The search giant is also offering $50 million in grants and partnering with Girls Who Code, a nonprofit launched in 2012 that runs summer coding institutes for girls, including the one that helped focus Navarro's passion for technology.

A preview test run of Google's online coding lessons this week was deemed "awesome" by Carmen Ramirez y Porter, 11. "It's not very complicated. It's easy and fun and really cool to see how it turns out when you finish," she said.

National Center for Women & Information Technology CEO Lucy Sanders, a leading advocate for women in computer sciences, sees the Made With Code initiative as a pivotal moment in what has been a long-term challenge of getting more girl geeks growing up in America.

"It used to be that as a computing community we didn't really talk about gender issues. But now we're really pulling together, from corporations and startups to nonprofits and universities," Sanders said. "I'm very optimistic."

There's plenty of room for change.

Female participation in computer sciences has dropped to 18 percent, down from 37 percent in the 1980s, and only seven percent of U.S. venture capital deals go to women founders and CEOs. Just 20 percent of the 30,000 students who took the Advanced Placement computer science test last year were girls, according to a College Board analysis, which showed no girls at all took the test in Mississippi, Montana or Wyoming.

YouTube CEO Susan Wojcicki, one of the earliest Google employees, points to societal and economic drawbacks if women are not participating in the booming tech economy.

Also, she said, "I miss having more women counterparts."

Tech firms are overwhelming male - Yahoo on Tuesday released a report showing 62 percent of its global employees are men. At Google, about 70 percent of the roughly 44,000 people it employs throughout the world are men. This year, the search giant commissioned a nationwide study to find out why so few women pursue technology careers, asking 1,600 people about whether they were encouraged to study computer sciences and had opportunities to learn to code.

Their findings, shared with the AP this week in advance of public release: Girls have little exposure to technology and computer sciences. That doesn't mean they're not interested, however. If parents, friends and teachers encourage their daughters to pursue computer sciences, schools offer more courses and more role models step forward, the field can be leveled.

But to capture girls, it's got to be fun.

That's the plan for a "Made With Code" kick-off event in New York Thursday for 150 girls, where indie rockers Icona Pop will perform and coders will demo how they make everything from animated movies to designer fabrics with software. Actress Mindy Kaling, who is the event's master of ceremonies, said she fights gender bias in Hollywood, but when a techie friend told her about Silicon Valley's gender gap "it was staggering."

"Just as television and movies need to reflect their audience, I think it's important that people who create technology reflect the diversity of people who use them," she said.

Chelsea Clinton, who is representing the Clinton Foundation at Thursday's event, said she got her own first computer in 1987 from Santa Claus.

"Ultimately computer science is helping to create the future," she said. "So when we think about the future, we know we need to be doing more in this country and around the world to ensure that girls and women see computer sciences as real, viable options for them."

Entrepreneur Dez White wasn't necessarily pursuing a tech career when she asked a patron at her family's restaurant to teach her to write software. She just had an idea for an app and wanted to make it.

"It was very hard for me to get my head around it," White said. "I didn't go to Stanford for code."

Today, she hires coders for her firm Goinvis, which sells privacy apps that allows users to send texts that self-destruct at a set time and emails that disappear from an inbox after they're opened.

But in addition to her day job, as a successful female African-American entrepreneur, she realizes she needs to be a mentor as well.

"I think young women don't even realize computer sciences are an option. It's not laid out like nursing and social work," she said.

Next year, she's planning to organize a technology retreat for high school girls, and she tries to hire women for her growing company.

"It's hard. We have to really look. Their numbers are very, very slim," she said.