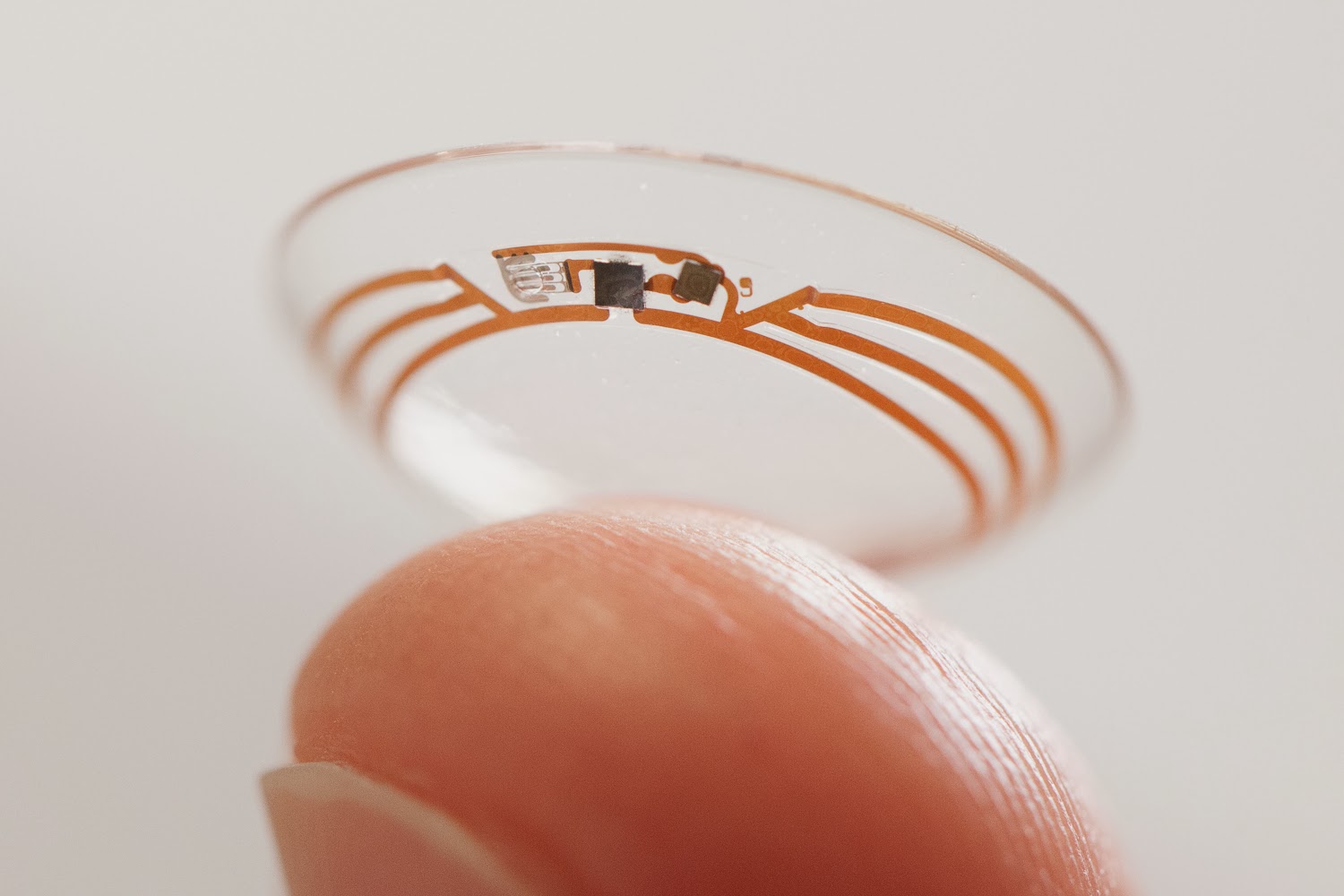 Brian Otis gingerly holds what looks like a typical contact lens on his index finger. Look closer. Sandwiched in this lens are two twinkling glitter-specks loaded with tens of thousands of miniaturized transistors. It's ringed with a hair-thin antenna. Together these remarkable miniature electronics can monitor glucose levels in tears of diabetics and then wirelessly transmit them to a handheld device.

"It doesn't look like much, but it was a crazy amount of work to get everything so very small," he said before the project was unveiled Thursday.

During years of soldering hair-thin wires to miniaturize electronics, Otis burned his fingertips so often that he can no longer feel the tiny chips he made from scratch in Google's Silicon Valley headquarters, a small price to pay for what he says is the smallest wireless glucose sensor ever made.

Just 35 miles away in the beach town of Santa Cruz, high school soccer coach and university senior Michael Vahradian, 21, has his own set of fingertip callouses, his from pricking himself up to 10 times a day for the past 17 years to draw blood for his glucose meter. A cellphone-sized pump on his hip that attaches to a flexible tube implanted in his stomach shoots rapid-acting insulin into his body around the clock.

"I remember at first it was really hard to make the needle sticks a habit because it hurt so much," he said. "And there are still times I don't want to do it - it hurts and it's inconvenient. When I'm hanging out with friends, heading down to the beach to body-surf or going to lunch, I have to hold everyone up to take my blood sugar."

The idea that all of that monitoring could be going on passively, through a contact lens, is especially promising for the world's 382 million diabetics who need insulin and keep a close watch on their blood sugar.

The prototype, which Google says will take at least five years to reach consumers, is one of several medical devices being designed by companies to make glucose monitoring for diabetic patients more convenient and less invasive than traditional finger pricks.

The contact lenses were developed during the past 18 months in the clandestine Google X lab that also came up with a driverless car, Google's Web-surfing eyeglasses and Project Loon, a network of large balloons designed to beam the Internet to unwired places.

But research on the contact lenses began several years earlier at the University of Washington, where scientists worked under National Science Foundation funding. Until Thursday, when Google shared information about the project with The Associated Press, the work had been kept under wraps.

"You can take it to a certain level in an academic setting, but at Google we were given the latitude to invest in this project," Otis said. "The beautiful thing is we're leveraging all of the innovation in the semiconductor industry that was aimed at making cellphones smaller and more powerful."

American Diabetes Association board chair Dwight Holing said he's gratified that creative scientists are searching for solutions for people with diabetes but warned that the device must provide accurate and timely information.

"People with diabetes base very important health care decisions on the data we get from our monitors," he said.

Other non-needle glucose monitoring systems are also in the works, including a similar contact lens by Netherlands-based NovioSense, a minuscule, flexible spring that is tucked under an eyelid. Israel-based OrSense has already tested a thumb cuff, and there have been early designs for tattoos and saliva sensors.

A wristwatch monitor was approved by the FDA in 2001, but patients said the low level electric currents pulling fluid from their skin was painful, and it was buggy.

"There are a lot of people who have big promises," said Dr. Christopher Wilson, CEO of NovioSense. "It's just a question of who gets to market with something that really works first."

Palo Alto Medical Foundation endocrinologist Dr. Larry Levin said it was remarkable and important that a tech firm like Google is getting into the medical field and that he'd like to be able to offer his patients a pain-free alternative from either pricking their fingers or living with a thick needle embedded in their stomach for constant monitoring.

"Google, they're innovative, they are up on new technologies, and also we have to be honest here, the driving force is money," he said.

Worldwide, the glucose-monitoring devices market is expected to be more than $16 billion by the end of this year, according to analysts at Renub Research.

The Google team built the wireless chips in clean rooms and used advanced engineering to get integrated circuits and a glucose sensor into such a small space.

Researchers also had to build in a system to pull energy from incoming radio frequency waves to power the device enough to collect and transmit one glucose reading per second. The embedded electronics in the lens don't obscure vision because they lie outside the eye's pupil and iris.

Google is now looking for partners with experience bringing similar products to market. Google officials declined to say how many people worked on the project or how much the firm has invested in it.

"Already this has some breakthrough technologies, but this is a moonshot, there are so many challenges," he said.

One is figuring out how to correlate glucose levels in tears as compared with blood. And what happens on windy days, while chopping onions or during very sad movies? As with any medical device, it would need to be tested and proved accurate, safe, and at least as good as other types of glucose sensors available now to win FDA approval.

Karen Rose Tank, who left her career as an economist to be a health and wellness coach after her Type 1 diabetes diagnosis 18 years ago, also is encouraged that new glucose monitoring methods may be on the horizon.

"It's really exciting that some of the big tech companies are getting into this market," she said. "They bring so much ingenuity; they're able to look outside the box."