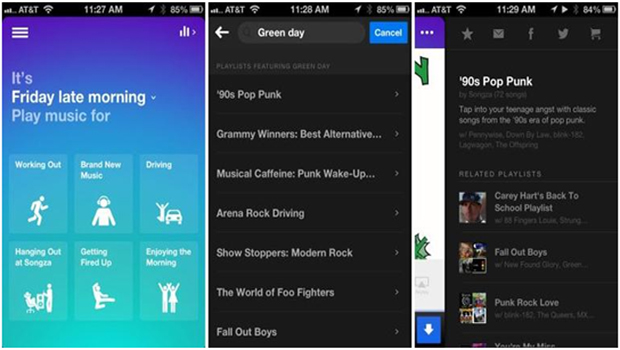 Google, turning up the volume to draw users away from Apple and Amazon, bought Songza, an online radio service that anticipates the kinds of songs users may want to hear next.

As competition in online music intensifies, and as technology moves toward a world that integrates the Internet into the machines that surround us, Songza's chief asset for Google is its focus on context. New York-based Songza is a radio-style, free service similar to Pandora with a greater emphasis on serving up music appropriate for the particular listener at the moment of listening -- something that will help technology work for consumers rather than the other way around.

That's in contrast to on-demand music services from Beats, which was just purchased by Apple, and Spotify, which include curated playlists and recommendations as a facet of their offerings but recruit paying subscribers by promising large, on-demand catalogs of songs without ads.

"We're moving to a time when context is king, when people don't have to find things," Songza Chief Executive Elias Roman said in an interview with CNET News. Google's takeover comes at an important time in that shift, he said. "Technology is about to work a lot harder for us. It's a cool thing to be a small part of that."

Google's acquisition comes as its rivals are also amping up their streaming-music services. In May, Apple announced a high-profile agreement to buy Beats Electronics, including the subscription streaming service Beats Music, for $3 billion. That followed Amazon's launch of a streaming-music service called Prime Music as part of its $99-a-year Prime membership program.

YouTube, Google's own online-video behemoth, is expected to launch a streaming service of its own this summer.

In a statement, Google said there would be no immediate changes to Songza. The Mountain View, Calif.-based search engine said that the company will explore ways to integrate Songza into Google Play Music and will also consider opportunities to integrate it with YouTube and other products.

Talks between Google and Songza were previously reported by the New York Post last month.

Songza focuses on playlists curated by music experts that are designed for specific activities or occasions, which Songza then suggests to specific listeners based on seven points of context: day of week, time of day, the device used being used, weather, location, what the particular listener has done before considering those previous five points, and then what all other Songza listeners have done before given those five points.

The prompts that Songza puts in front of listeners -- looking for a playlist while working in an office or while driving home during a hot summer day? -- mean Songza users volunteer information about what their doing for Songza to digest about future habits.

"There are very few services that people want to tell exactly what they're doing at any given moment," Roman said. "The thing that's really important is the ability to use data in a way that makes people's lives better."