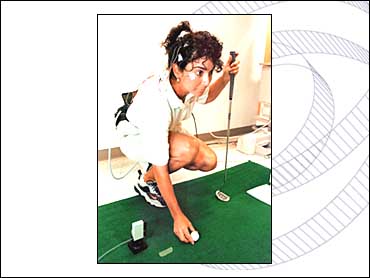 Elite athletes call it the zone: an altered state of being that enables them to focus so deeply on performing that their actions become almost automatic, and success is nearly guaranteed.

In an unusual study at the University of Chicago, scientists are peering deep into the brains of professional golfers to find out what happens on a neurological level when they enter that elusive zone. Researchers hope the answers will lead to new methods of helping stroke patients relearn tasks such walking.

The leisurely pace of golf offers a rare perspective because players can take time before making a shot to visualize exactly what they want to do. It's something nearly all elite players do for several seconds before stepping up to the tee, said Dr. John Milton, a UC neurologist and the study's director.

Milton and colleagues believe that brain activity during this "imaging" phase is exactly the same as during the actual physical movement.

If the findings support that theory, their goal is to eventually add imaging techniques to the rehabilitation of patients recovering from strokes and other brain damage.

While other research has been done on the process of visualizing a task, Parrish said Milton's focus on "high performance motor movements" and imagery "is sort of the unique twist."

If Milton can show that visualizing can cause "motor pathways to strengthen" in the brain, "that's going to be a tremendous difference" for stroke patients, Parrish said.

Nine top women golfers, including five who didn't make the final cut at the U.S. Women's Open in suburban Chicago over the weekend, volunteered to serve as guinea pigs in a setting far different from the hushed silence of a tournament course.

LPGA tour veteran Michelle Bell prepared to raise her putter while undergoing an electroencephalogram, or EEG. Researcher Debbie Crews stood nearby at a video monitor measuring Bell's brain waves while the golfer imagined the put, and then took it.

As she putted, her EEG showed tall, spiky alpha waves emanating from the brain's left side, during the visualizing phase and smaller beta waves, from the right side, when she swung the club.

The brain's left side is where more analytic thoughts occur, and proved to be more active when golfers concentrated deeply, said Crews.

"I never thought my brain activity while I golf could help stroke victims," Bell said. "This is great."

In another part of the study, the golfers were strapped for 80 minutes into a functional magnetic resonance imaging machine, a brain scanner that provides multidimensional images of the brain in action and looks deeper into the brain than the EEG.

There, they again visualized shots while hotographs of a fairway and green were projected onto a screen above their feet, and were told to lift their fingers when they imagined actually swinging the club.

With the MRI and EEG data, the researchers hope to pinpoint where exactly in the brain neural activity occurs when athletes are in the zone, Milton said.

Results won't be known until the study's next phase, when the LPGA golfers' scans will be compared with tests on amateurs to see how brains acquire and store complex movement commands.

The findings won't be used just for science.

Betsy Clark, the LPGA's director of education, said information on the pre-shot routine also will help teach professional golfers how to improve their performance.