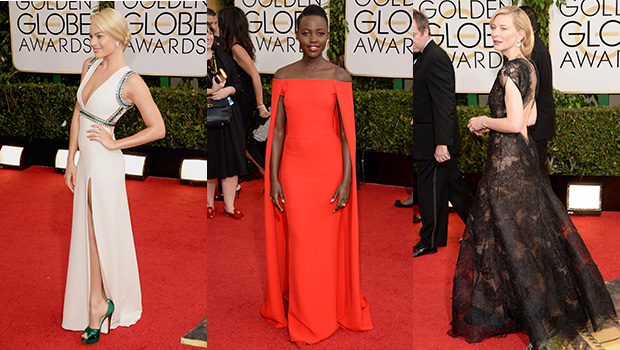 The Golden Globe Awards red carpet was black, white and red all over. Shades of all those hues could be seen everywhere at The Beverly Hilton on Sunday night.

The fashion was both varied and exciting, said celebrity stylist David Zyla.

Color-wise, though it was all about black, white and red. "Black is back and better. This time it was infused with a little unexpected color or detail," noted Zyla, who cited Cate Blanchett’s Armani textured, lace black backless gown "with the unexpected pop of the green diamond earrings." Juliana Margulies also chose black, donning an Andrew Gn ball gown with short-sleeves and bronze details. Golden Globe winner Elisabeth Moss, meanwhile, donned a black J. Mendel gown with an art-deco pattern.

"Sofia Vergara wore a black strapless black Zac Posen gown that was architectural and stunning and did the unexpected by pairing with a '60s inspired necklace," said Zyla.

"We also had a bit of a white-out on the carpet as well," said Zyla. "Various shades of white were paired with vintage detail from the '60s and '70s."

Actress Margot Robbie donned the look in a Gucci dress with beaded accents, for instance. "It was very reminiscent of the late '60s," said the Emmy-winning stylist and author of "Color Your Style."

Zooey Deschanel’s "daring and exciting" choice worked. She wore pear-colored bodice, paired with a gold Oscar de la Renta skirt and topped it off with a vintage flower and side-do.

Jennifer Lawrence -– one of the evening's big winners -– showed us that she really does love white. Last year, she wore a white gown to the Oscars. On Sunday night, she sported a snow-colored ball gown with a black ribbon detail. "She had an unexpected pop with the gorgeous green earrings," said Zyla. "Scandal" star Kerry Washington showed off her baby bump while wearing a sleeveless white gown. The proud mom-to-be said, "I also feel like I have the best date of the night, my little accessory here." She hit all the right notes with her look, said Zyla.

And then there was the red. Who couldn't notice Amy Adams' "American Hustle"-inspired plunging Valentino gown? "It was unexpected shades of merlot and tomato together," said Zyla.

And don't worry, men, we haven't forgotten about you. The guys of Hollywood hopped on the blue trend. "Blue is the new black," said Zyla. Will Forte, Seth Meyers and Robert Downey Jr. all sported blue –- ranging from a midnight hue to ink colors. "It was exciting. It wasn't a sea of black."

Tell us: Who rocked the red carpet? Who were the biggest fashion misses?