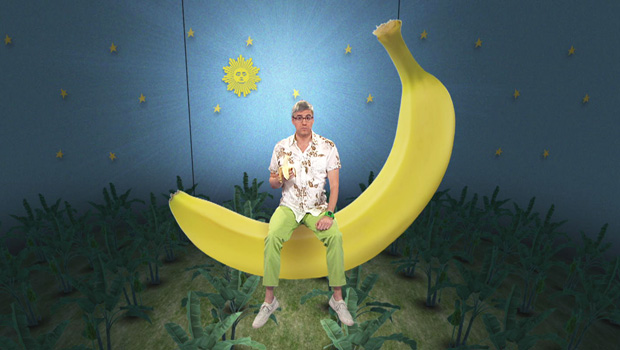 Mo Rocca on the appeal of America's most popular fruit:

Eating a banana in and of itself may strike you as totally uninteresting. But if you peel back the layers on America's most popular fruit, it's actually pretty revealing.

Most of the bananas we eat are grown down near the Equator: Costa Rica, Guatemala, Honduras, Panama, Colombia and Ecuador. And getting them from there to your breakfast table isn't so simple.

The unripe fruit is harvested, packed in boxes, and shipped to ports in the U.S.

Stephen Georgallas is a second-generation owner of Banana Distributors of New York in the Bronx. "Our family's been doing it for about 75 years," he said. "So I grew up being bananas about bananas."

"And you run this joint now?"

"I can't say that, because that's my competitor across the street."

When the bananas arrive stateside they look vibrant green, and are rock-hard. "Well, it's unprocessed," said Georgallas. "This is the way it would look like when it's picked from the plant.

Before the bananas make their way to the grocery store, they spend time in what's called a ripening room ... a five- to seven-day stay at a carefully-calibrated temperature, with ethylene gas added to expedite the ripening.

Tony Comando (a "master ripener") has been in charge of banana ripening here for 14 years.

Bananas have been around for thousands of years, but they were late arrivals in the United States. "They were officially introduced in 1876, at the Centennial Exhibition in Philadelphia," said William Goldfield of the Dole Food Company. "At that time, I think, there were selling about ten cents apiece. Came wrapped in foil, kind of a novelty."

Soon the banana had everyone excited.

By about 1920 the banana was the number one fruit sold in the United States, for half the price of apples, according to Dan Koeppel, author of "Banana: The Fate of the Fruit That Changed the World" (Plume). "And to this day that remains the case. The banana is the cheapest fruit in the supermarket, even though it's grown from so far away."

Koeppel says to keep bananas' costs down, companies like United Fruit (now Chiquita) and Standard Fruit (now Dole) made favorable deals to get cheap or even free land and labor.

"And so this began what are now known as the Banana Republics -- these countries throughout South and Central America where bananas were grown," Koeppel said. "The banana industry really ran these countries."

In Victorian times, the suggestive shape of the fruit was a problem, so marketers printed postcards to show that it wasn't unladylike to eat a banana.

By the 1940s those concerns were a distant memory; Americans went head over heels for a lady who wore bananas on her head: Brazilian bombshell Carmen Miranda.

Now there are about a thousand different kinds of bananas in the world, and half of those are edible. But more than 99 percent of bananas sold in the U.S. are just one kind: The Cavendish. And each Cavendish is exactly like every other.

"We don't use the term clone, but they're a monoculture," said Goldfield. "They are brought from a slice of a previous plant. So they do have the same DNA structure."

"The Cavendish is, sadly, the worst banana anyone could ever eat," said Koeppel. "It has very little flavor compared to other bananas."

So yes, we'll have no bananas, if the Cavendish is wiped out globally.

And that's a shame, 'cause the banana is a pretty appealing fruit. But the PEEL of the banana, that's another story.

As early as 1879, Harper's Weekly warned readers about the danger of tossing their banana skins on the ground because someone might slip. No joke!

But then it became a joke ... a big one. Even the great Charlie Chaplin couldn't resist.

And comics have been getting peels of laughter ever since.