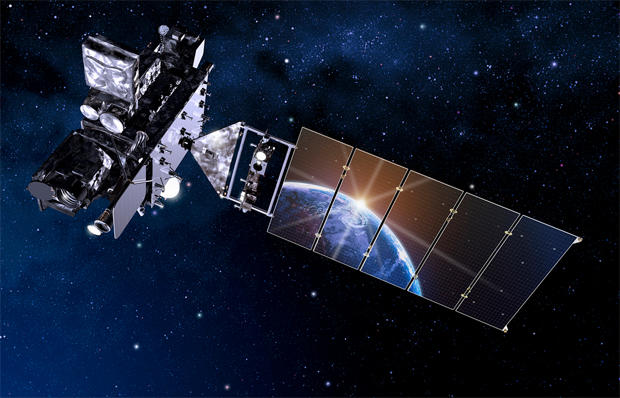 A powerful new weather satellite, the first of four at the heart of a nearly $11 billion upgrade to the nation’s forecasting infrastructure, completed a fifth and final main engine rocket firing Tuesday, the last step in a 10-day climb to its operational orbit 22,300 miles above the equator.

Greg Mandt, the GOES-R program director with the National Oceanic and Atmospheric Administration, said the agency hopes to downlink the first pictures from the satellite’s camera, the Advanced Baseline Imager, or ABI, in early January, after allowing trapped gases and contaminants to escape in the vacuum of space.

“We let it outgas for 30 days before we open up the instruments and start running data through them,” Mandt said. “Things have been very nominal at this point. So to me, the (next) big thing is when we open up the ABI lens and get our first image.”

Mandt said the agency hopes to unveil one of the first high-resolution pictures during the January meeting of the American Meteorological Society in Seattle.

Launched Nov. 19 atop a United Launch Alliance Atlas 5 rocket, the Geostationary Operational Environmental Satellite — GOES-4 — also is equipped with a first-of-a-kind lightning mapper and a suite of sophisticated sun-watching and space weather instruments.

GOES-R will scan the western hemisphere five times faster than current satellites with four times the resolution across multiple spectral bands. As such, it represents “a quantum leap above any satellite NOAA has ever flown,” Stephen Volz, NOAA associate administrator for satellite and information services, said before launch. “Without a doubt, GOES-R will revolutionize weather forecasting as we know it.”

The Atlas 5 released the satellite into a highly elliptical initial orbit, with a low point of 5,038 miles and a high point of 21,926 miles. To reach the required circular orbit 22,300 miles above the equator, where satellites take 24 hours to complete one orbit and thus appear to hang stationary in the sky, the spacecraft’s main engine. with a thrust of 100 pounds, had to complete five relatively long firings.

The same type Liquid Apogee Engine experienced problems aboard two other satellites. GOES-R is equipped with smaller maneuvering thrusters that could have pushed the satellite to its final orbit if necessary, but Mandt said the main engine performed flawlessly.

Even so, engineers opted to adjust the durations of the final four rocket firings after noticing higher-than-expected temperature readings on a truss holding the rocket nozzle in place. As it turned out, the pre-flight temperature limit was not valid for GOES-R and engineers decided to raise it after the first LAE firing.

But in “an abundance of caution,” Mandt said, the durations of the four subsequent LAE burns were adjusted, keeping them all under 41 minutes each to reduce heating. In addition, activation of a heater used to warm the spacecraft truss structure before engine firings was delayed. The fifth and final rocket firing was successfully executed Tuesday afternoon.

Bottom line: “There’s no concern there,” Mandt said. “The engine’s performing just as we expected.”

NOAA is spending nearly $11 billion to buy the GOES-R, S, T and U satellites, their rockets and launch services, along with major upgrades to ground systems and data analysis infrastructure. Each satellite is valued at around $500 million, not counting development costs.