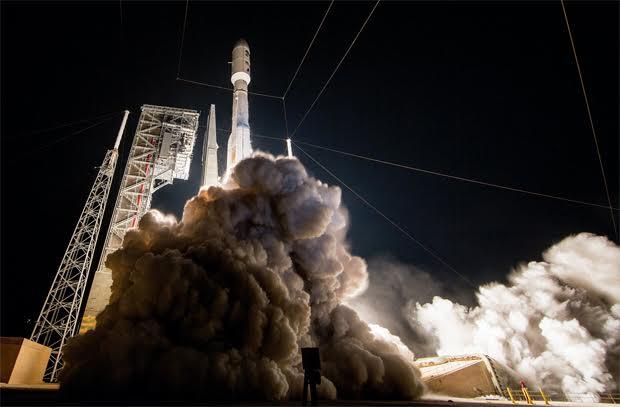 A United Launch Alliance Atlas 5 rocket boosted a powerful new weather satellite into orbit Saturday, the first of four in an $11 billion upgrade to the nation’s forecasting infrastructure that will track and provide near real-time imagery of threatening storms, lightning and other weather phenomena.

Initially climbing straight up, the rocket quickly arced away to the East over the Atlantic Ocean, putting on a spectacular early evening show for area residents. tourists and dozens of meteorologists and television forecasters who gathered at the Cape to witness the long-awaited flight.

Shedding the strap-ons just under two minutes into flight, the first stage boosted the rocket out of the dense lower atmosphere and then fell away four-and-a-half minutes after launch. A single hydrogen-powered Aerojet Rocketdyne RL10C-1 engine in the rocket’s Centaur second stage then fired up to continue the push to space.

A little more than 12 minutes after launch, the Centaur engine shut down, placing the latest Geostationary Operational Environmental Satellite -- GOES-R -- into the planned preliminary orbit.

Two more burns were required over the next three hours to complete the launch phase of the mission. The flight plan called for GOES-R to be released into an elliptical orbit with a high point, or apogee, around 21,926 miles and a low point, or perigee, of about 5,038 miles.

GOES-R is the most advanced high-altitude weather satellite ever built, featuring a high-speed multi-spectral camera, a first-of-its-kind lightning mapper and a suite of space weather sensors that represent a “quantum leap” for forecasters, officials say, one that will help save lives and property over the program’s 20-year life.

“For weather forecasters, GOES-R will be similar to going from a black-and-white TV to super high-definition TV,” said Stephen Volz, associate administrator for satellite and information services with the National Oceanic and Atmospheric Administration.

“For the American public, that will mean faster, more accurate weather forecasts and warnings. It also will mean more lives saved, and better environmental intelligence for state and local officials and all decision makers.”

If all goes well, an on-board thruster will be fired five times over the next nine days to put the spacecraft into a circular orbit 22,300 miles above the equator where it will take 24 hours to complete one orbit and thus appear to hang stationary in the sky. From that lofty perch, GOES-R will view the entire western hemisphere.

“We’ll be able to (image) the whole hemisphere every five minutes or better yet, for a hurricane or a big thunderstorm, we’ll be able to actually focus in and do updates every 30 seconds,” said Greg Mandt, NOAA’s GOES-R program director. “And we get the data to the forecasters within seconds or minutes.

“So in a sense, it’s like watching it with a camera in real time so they can really watch what’s going on, how it’s unfolding and therefore make much more precise warnings of the significant weather events that are coming on.”

GOES-R is the first of four next-generation weather stations being built by Lockheed Martin Space Systems in a nearly $11 billion program that includes major upgrades to ground stations and data analysis infrastructure. The program is intended to provide uninterrupted hemispheric observations through 2036.

GOES-R, which will be renamed GOES-16 after testing is complete, is equipped with a powerful new camera known as the Advanced Baseline Imager, or ABI, that will take pictures five times faster than current GOESs cameras, with four times the resolution and three times the spectral coverage.

“Forecasters will have far more detailed views of weather systems,” said Joe Pica, a senior manager with the National Weather Service. “We’ll be able to see rapidly developing events in real time and when we see an evolving weather system, we’ll be able to zoom in and use that high spatial resolution to take pictures in 16 different spectral channels every 30 seconds.”

The spectral imagery, combined with doppler radar data, “will improve our understanding of whether a storm is growing or decaying,” Pica said. “It’ll help us track severe storms, including tornadoes, forecast wildfire movement, track plumes from volcanic eruptions and tell whether a hurricane is intensifying.”

Along with the ABI camera, GOES-R also features a sensitive magnetometer, an ultraviolet X-ray sensor to measure how solar radiation affects the upper atmosphere, an ultraviolet imager to constantly monitor the sun and sensors to measure charged particles from the sun that can affect communications and navigation.

The lightning mapper, a first for a GOES spacecraft, will take infrared photos of lightning fields in the western hemisphere about 200 times a second.

“What the researchers have found is that where you have tremendous growth in the number of flashes going on, that is where the severe storms are really starting to grow,” Mandt said. “By getting the data to the forecasters in seconds, they get an earlier indication of, like, a tornado formation. Better yet, because of the precision of the data, you can also be more confident in a forecast.”

With today’s aging satellites, he said, forecasters tend to “over-warn like 80 percent of the time.”

“This hopefully will cut that in half so people will know that when they get a tornado warning, indeed they want to react,” he said. “The hurricane researchers and forecasters are really excited about what they’ll be able to see ... to not only help, maybe, reduce the cone of uncertainty (in a hurricane’s path), but be better able to forecast changes in intensity.”

NASA is responsible for procuring weather satellites for NOAA, arranging for launch and overseeing testing and checkout in orbit. GOES-R will be turned over to NOAA for operational use after that testing is complete.