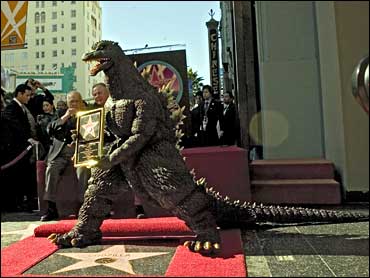 Godzilla finally received a star on the Hollywood Walk of Fame, 50 years after he stomped onto movie screens and hours before the premiere of his latest film, "Godzilla: Final Wars."

Producer Shogo Tomiyama appeared at a ceremony Monday outside Grauman's Chinese Theatre, where the 2,271st star is located.

"I'm here representing Godzilla. Unfortunately, he cannot speak English," he said. "We're very excited he is being honored in America."

On screen, the fire-breathing sea creature was spawned by nuclear weapons testing. A version starring Raymond Burr made it to theaters in the United States two years later.

The idea for Godzilla emerged from an actual historical event.

In 1954, a U.S. hydrogen bomb test explosion on Bikini atoll in the central Pacific exposed the crew of a Japanese fishing vessel to dangerous levels of radiation. Japanese — who had suffered through the bombings of Hiroshima and Nagasaki less than a decade before — were outraged.

But Toho producer Tomoyuki Tanaka saw the disaster as something else: the perfect backdrop for a movie. He swiftly secured a $277,000 budget for a horror film about an H-bomb test monster — Godzilla.

The original "Godzilla" film earned a Japanese Academy Award nomination for Best Picture, the only picture in the series to do so.