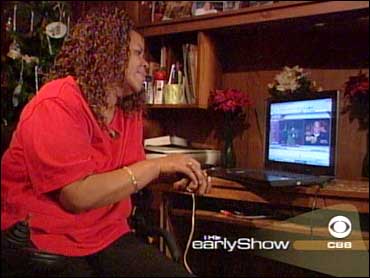 For people who like the idea of church but don't like waking up early or dressing up on Sunday mornings, there may be a new alternative.

She explains it's just like podcasting, in which you download audio files from your computer onto an iPod or MP3 player. Then, you can listen to the content anytime, anywhere.

Turner says churches are also turning to the Web to get their message out, streaming their services live.

And, says Turner, while it may sound more high-tech than heavenly, it's the newest way churches are spreading the word.

It enables people such as Melisse Mossy to get the gospel while she's getting in some horseback riding.

She "attends" church via her iPod, with services downloaded from the Web site of The GodCast Network, godcast dot org.

"Being out in nature," she tells Turner, "and being able to ride my horse and have GodCast with me … It's just a time that I don't have to think about anything else other than (what) I'm learning."

He heard about podcasting about a year ago, then had what some might call his divine inspiration, creating podcasts of the sermons of his pastor from the church in Rancho Santa Fe, Calif., and dubbing them "Godcasts."

Anyone with a computer can just go to godcast.org, click on a sermon, then download it into an iPod.

"If people come and check this out," says Patchett, "and they like what they hear, and they decide that they want to explore Christianity more, and they go and check out a church, that's great."

"I think what's happened is (technology has) blown the church mentality of four walls and a roof … right off the map. And that's good. Because I think Jesus wants us to go into all the world and simply preach the gospel, using every possible technology available to man."

In addition to enabling the downloading of files, thousands of churches stream, that is, broadcast their services live on the Internet.

Chance Mason, president of Streaming Faith, the largest provider of Internet services to churches worldwide, says, "The faith-based community was one of the first communities to really embrace the delivery of content via the Web.

"We currently do about 1,500-2,000 live events a month from all over the world: the East Coast, the West Coast; we have clients in New Zealand, Canada, three or four in the Bahamas."

Streaming Faith says it has a million visitors a month.

"It's just like I'm sitting in the audience and joining in," says Marion Penman. "It's like I'm at the service."

Streaming is the only way Penman can worship. She has multiple sclerosis and can't get to church.

She says the streaming has changed her life: "It's like a rejuvenation. It opened up things that I was losing. I was losing a lot spiritually. And it was like an awakening for me."

Track: for those who enjoy church, these high-tech options are a convenience.

But they are also ways to reach people who may never step foot in a sanctuary.

Both the GodCast sermons and services on Streaming Faith are free.

Turner adds that Botsford and Mason say they don't worry that the technology will keep people away from church. Quite the contrary: They say it attracts worshippers.

As for donations, you can make them online in some cases.