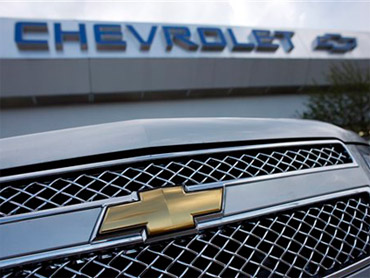 General Motors Co. is back in the Super Bowl in a big way.

The automaker will air five Chevrolet commercials during the Feb. 6 game on Fox, the company said Monday, along with two ads in the pregame show and one in the post-game show, which it also is sponsoring. GM also plans a tie-in with Fox's post-Super Bowl "Glee" episode and will give a Camaro to the game's most valuable player.

GM wouldn't say what it is spending on the blitz. But with commercial time averaging about $3 million for 30 seconds, it's a multimillion-dollar investment for a company that has sat out the game for two years as it reorganized and emerged from a government-led bankruptcy.

The ads bear the tagline "Chevy Runs Deep," introduced during the World Series last year. In one ad, a seemingly mundane car dealership ad is disrupted when a Camaro suddenly morphs into the Bumblebee character from the "Transformers" movies.

In another, people in a retirement home discuss a Chevrolet Cruze ad they are watching on TV. A third spot shows a woman driving a Camaro through action-movie sequences, while two people talk about the action in a voiceover as though they were coming up with a movie.

In the fourth ad, a Silverado acts like Lassie, helping a boy's parents rescue him from increasingly bizarre scenarios.

The fifth ad shows world-changing inventions powered by electricity, including the light bulb and computer, ending with Chevrolet's electric car, the Volt.

The ads are humorous, but General Motors Global Chief Marketing Officer Joel Ewanick said the company tried hard to keep the humor from overshadowing the message.

"We have an enormous responsibility and opportunity to reintroduce Chevrolet in an engaging and interesting way," he said.

Ewanick said GM plans to release the ads beginning Friday to Facebook fans of its cars. The commercials were created by Goodby, Silverstein & Partners in San Francisco.

GM last advertised during the Super Bowl in 2008, before the auto industry was brought to its knees by the recession. It emerged from bankruptcy reorganization in 2009 and returned to being a publicly traded company at the end of last year in a $23.1 billion initial public offering, the biggest in U.S. history.

General Motors historically had been one of the heaviest advertisers in the game. Between 2001 and 2010 it was the fourth largest Super Bowl advertiser, spending $61.1 million, according to Kantar Media.

At least nine automakers are airing commercials during the Super Bowl this year, with Ford Motor Co. being the most notable absence.

A Kia ad shows an alien driving a Kia; Volkswagen features an animated Beetle speeding through a forest.