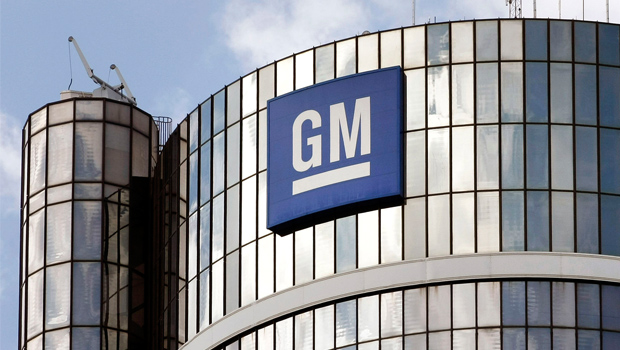 The Detroit company said it has cut 2,300 jobs in Europe this year and wants to trim 300 more, part of a larger plan to reduce costs and raise revenue in the struggling region with new vehicles that are more appealing to buyers.

But investors looked past the decline because GM's earnings far exceeded expectations. GM's stock rose $2.22, or 9.5 percent, to close at $25.50 Wednesday.

The company rode North American profits, big improvements in South America and strong earnings in international areas outside of China to make $1.48 billion, or 89 cents per share for the quarter. That's down from $1.73 billion, or $1.03 per share, a year earlier. Excluding one-time items, the company made 93 cents per share, beating analysts' estimates by 33 cents.

Still, there are signs of trouble. Profit in North America, GM's most lucrative market, fell 17 percent from July through September. The company's U.S. market share dropped more than two percentage points to 17.6 percent, and its U.S. sales increase of 3.4 percent for the year lags overall market growth of 14.5 percent. In Europe, where GM hasn't made money in a dozen years, it lost $478 million before taxes. That's $186 million worse than a year earlier.

Yet GM said its third-quarter performance shows that steps it has taken to fix troubled business units are working. Four of the company's five units were profitable, with Europe the only exception. "It stems from our geographic diversity, strong brands and the financial rigor we are instilling in the business," Chairman and CEO Dan Akerson said.

Fourth-quarter pretax earnings should be about the same as last year's $1.1 billion, the company said.

In Europe, GM made rosier predictions than other automakers. The company expects to break even before taxes by the middle of the decade. Losses this year are expected to run from $1.5 billion to $1.8 billion, about double the figure from 2011. Next year, losses should be slightly less.

The job cuts, which have come mainly through voluntary departures and early retirements, are part of a plan to cut $300 million in costs this year and an additional $500 million from 2013 to 2015, said Vice Chairman Steve Girsky, who is leading the restructuring. More job cuts could be made in the future depending on sales.

GM also is cutting inventory and low-profit rental car sales in Europe, and it plans to eliminate a third shift now working at its Eisenach plant in Germany next year. It's also reviewing whether its transmission plant in Strasbourg, France, will stay open. It's negotiating the closure of its Bochum plant in Germany, and it plans to cut Opel Astra production from three plants to two.

But cost reductions, Girsky said, aren't the only way the company plans to fix Europe. It has changed leadership, bringing in outside executives and several from North America. The company plans 23 new models and 13 new engines by 2016 in an effort to raise sales, including the Opel Mokka small SUV and the Opel Adam small car due out later this year. GM has 45,000 orders for the Mokka, far more than it can fill this year, Girsky said.

Girsky said all of this is being done with no expectation for improvement in Europe's economy, which has been hit hard by government debt problems.

"We're developing a plan that is not highly dependent on (the) external environment dramatically improving over the next several years," he said.

In North America, GM's pretax profit fell 17 percent to $1.8 billion. But in South America, the company swung from a $44 million loss last year to a $114 million profit on the strength of new models. And GM's international operations, fueled mainly by areas outside of China, nearly doubled its pretax profits to $689 million.

GM also acknowledged that its third-quarter North American pretax profit margin of 7.8 percent was far below rival Ford Motor Co.'s 12 percent. GM plans to close the gap in part with higher revenues when new products, including pickup trucks, roll out. GM now has the oldest North American model lineup in the industry, but it plans to revamp 70 percent of its models in the next two years.

The company also said 12,600 - about 30 percent - of its U.S. salaried retirees took lump-sum payments instead of monthly pension checks. It also expects to close a deal next month to shift liability for its salaried pension plan to an annuity managed by The Prudential Insurance Co. The actions will cut GM's pension liability by $29 billion, $3 billion more than the original estimate of $26 billion, the company said.