In his first news conference as CEO, Fritz Henderson said he expects the company would "need to take further measures" beyond the five plants the company said it would shutter when it submitted a restructuring plan to the government last month.

GM also is likely to offer another buyout program to workers as it looks to cut labor costs, Henderson said.

President Barack Obama said Monday that GM's initial plans to become viable didn't go far enough. He gave the company 60 days to make more cuts and get more concessions from bondholders and unions or it won't get any more government help.

The Obama administration also asked former CEO Rick Wagoner to resign, and Henderson took over as CEO on Monday.

Henderson said that although GM would prefer not to use bankruptcy protection to save itself, it is "certainly more probable" than in the past.

The company, he said, has until June 1 to accomplish changes sought by the government, or it will be in bankruptcy. The 60-day deadline should be enough time, but if it becomes evident that the changes can't be made by the deadline, GM could go into court sooner, he said.

"It doesn't have to take 60 days. If it's quite clear that we're not able to accomplish what we need to do in terms of operational restructuring, reduction of debt on the balance sheet and what we need to do to accomplish these broad parameters of having a viable business, this will be a management judgment" reviewed by the Obama administration's autos task force, he said.

Henderson also said GM is still talking with potential buyers of the Hummer brand, and a decision on the brand's fate will come in the next few weeks. GM said in a viability plan filed with the government in February that it would make the decision in the first quarter, which ends Tuesday.

While the future of plants is uncertain, so too is the fate of the nation's roughly 20,000 auto dealerships, many of whom are already struggling to stay in business.

The Obama administration's increased involvement in the auto industry did not sit well with Republican Senator Bob Corker of Tennessee, who today called the president's demands of GM and Chrysler "a dangerous precedent."

"I think for all of us who believe in free enterprise, this is the crossing of a major threshold, and it actually should send a chill to people all across the country," Corker said on CBS' The Early Show Tuesday.

"You know, we have become numb to all the bailouts that are taking place. And yet yesterday this administration decided that they know best as it relates to this industry - they're going to be making decisions about which plants close, which plants stay open." 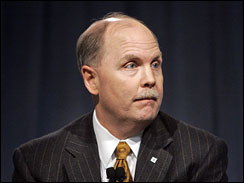 In an effort to increase sales, GM launched a program called "Total Confidence" that will make car payments for customers who lose their jobs through no fault of their own.

GM will make up to nine payments of $500 each to qualifying customers. Consumers must qualify for state unemployment benefits to be eligible for the program.

The program starts Wednesday and runs until April 30.

Ford Motor Co. announced a similar program Tuesday, which will take over customer's payment of up to $700 a month for a year in the event of job loss.