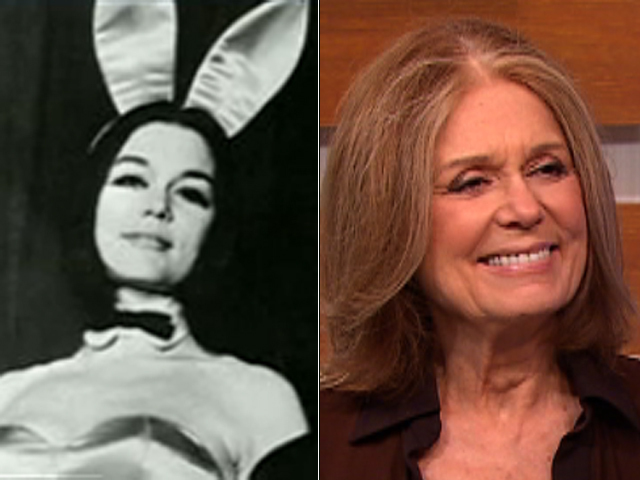 Gloria Steinem has been described as a feminist, journalist, and social political activist, and recognized around the world as the articulate, outspoken leader of what's known as the women's liberation movement of the late 1960s and 1970s. Monday night, she will be the subject of a documentary on HBO called "Gloria: In Her Own Words."

On "The Early Show," Steinem said she appeared in the documentary to tell her "imperfect stories."

"I'm certainly a festival of imperfections, because, otherwise, I feel that the media distances people, and you come to feel you can't do anything, only people at the top can do it, it disempowers (sic), rather than empowers, and also I wanted to show how far we've come in 30 or 40 years so people can think, 'OK, where do we want to be in 30 or 40 years?' because the movement has just begun."

The documentary addresses her four decades leading a revolution for women, as well as the extraordinary measures she went to in her work. Steinem, at one point in the film, even discusses her time as a Playboy bunny.

On "The Early Show," co-anchor Rebecca Jarvis asked Steinem about the regrets Steinem says she felt going undercover for a 1963 article called "A Bunny's Tale."

Jarvis asked, "What did you regret about it?"

Steinem said, "Some things I don't regret, because it did improve working conditions, just as one example, you know. ... The waitresses had to have internal exams and Wassermann tests for venereal disease, and they were told it was a requirement of the state -- hello -- it wasn't at all. That changed, some things changed, and exposed it as tacky, which it really was. The Playboy Club was profoundly tacky, I have to say, and people did not get promised wages, so they had a tough time keeping people."

Steinem's career of activism began when she graduated from Smith College in 1956. Women had few opportunities back then. Women were not allowed to run in the Boston Marathon or even have credit cards without their husband's permission.

As a young journalist, Steinem helped change the tone when she co-founded in 1971 an outspoken magazine called Ms.

Steinem said of her magazine, "There was really nothing for women to read that was controlled by women."

Ms. was instantly successful, selling out 300,000 copies in just eight days when it published the names of women who had abortions. It made domestic violence a national issue by showing the face of a bruised woman on its cover, and long after she retired as its editor, her legacy continues.

In an interview featured in the new HBO documentary, Steinem tells a reporter, "You have to understand, we are not trying to do to men what men have done to us. We're trying to humanize both roles."

But Steinem did not always win - even with some women.

Conservative activist Phyllis Schlafly said in the 1980s, "The women's-libbers are sincere. The homosexuals are sincere, but they want to chance the supreme law of our land."

And, in 1982, the women's movement failed to add the Equal Rights Amendment to the U.S. Constitution. it would have assured that women had the same rights as men. It was setback, but not one that would deter Steinem from her lifelong work.

She said, "(It's) the right of an individual to decide when and whether to have children. That is terribly important for women, obviously, because it's the greatest determinant of whether we're healthy or not, poor or not, educated or not, in public life or not and, as we can see from the opposition here to reproductive freedom, that is the idea the government should make these decisions; you know, we're not there yet. We now have, more or less, the idea, and certainly approval of equal pay -- we don't have it yet -- but still the work that's done in the home, the work of nurturing and taking care of invalids and family members and so on, which is about 30 percent of productive work in the country, has no economic value, and you could give it an attributed value."

Asked by Jarvis if she would do that, Steinem said, "Yeah, well, you know, other countries have begun to do this. Listen, we like to think that this country is the best, and in many ways I think it is, because it has hope, which is very important, but in terms of representation, for instance, political representation in our national legislature, we're 70th in the world, seven zero."

Gloria: In Her Own Words" debuts Monday on HBO.