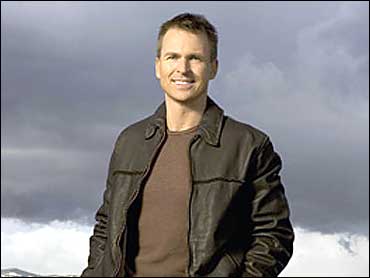 It's back to the future for the Emmy-winning reality adventure series "The Amazing Race" as it returns for its ninth season Tuesday night.

Back is the show's international format, with eleven teams of two traveling to exotic locations in five continents, and stops in the Middle East, Moscow and Sicily, among many others.

Contestants include a Pizza Hut manager, dentist, science teacher, children's minister, retired physician and valet. They'll compete against one another in a race around the world for the $1 million first prize.

As usual, Phil Keoghan is the host, and he with co-anchor Harry Smith on The Early Show Tuesday.

Season nine also features a contest in which viewers can win trips to the locales seen on the show each week.

The race begins in Denver, and the teams quickly jet off to their first destination, Sao Paulo, Brazil where, upon landing, they must venture deep into the heart of the city to find their next clue at the Hotel Unique.

Almost immediately, teams make their way by foot to a pedestrian footbridge overlooking a highway. One team struggles to locate the clue box, while other teams seem to find it with ease.

At the bridge, teams are faced with their first detour and must choose between finding a local motorcycle shop, where they will have to assemble a motorcycle from scratch, or soaring high above the city in a helicopter to try to locate a building where they'll find their next clue.

Keoghan tells Smith producers always intended to revert to teams of two, from the families as teams featured in the show's eighth edition. Clearly, he says, audiences prefer teams of two and fewer people and more exotic locales or, as Keoghan likes to say, "Less face, more places."

"I think the locations themselves are sometimes the bigger star then perhaps we realized," Keoghan observes.

Season nine, he says, has more miles in a shorter amount of time than ever seen on "Race" before.

"What we are able to do is give the audience a different perspective on the world then what they are being fed though the news every night, the message of wars, riots, and that it's unsafe to leave America. We are putting a positive spin on the world," Keoghan asserts.

Asked what some of the attributes are that winning teams have had over the course of the years, Keoghan says he doesn't really have an answer but, "Of course, intelligence, common sense, and being athletic doesn't hurt."

What about some of the biggest mistakes? "Not reading clues all the way through has got to be the worst," Keoghan responds. Also, giving up before it's over, and going too fast. Keoghan says teams need to slow down and think things through properly.

Their 9/11 Heroism Saved Them