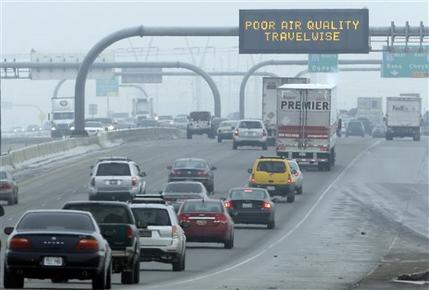 As the heat-trapping gas blamed for the largest share of global warming, carbon dioxide rose to global concentrations of 396 parts per million last year, the biggest year-to-year change in three decades, the World Meteorological Organization said in an annual report.

That's an increase of 2.9 ppm from the previous year and is 42 percent higher than before the Industrial Age, when levels were about 280 parts per million.

Based on the current rate, the world's carbon dioxide pollution level is expected to cross the 400 ppm threshold by 2016, said WMO Secretary-General Michel Jarraud. That is way beyond the 350 ppm that some scientists and environmental groups promote as a safe level and which was last seen in 1987.

Greenhouse gas emissions are building up so fast that top climate scientists are becoming increasingly skeptical that countries across the globe will meet the goal they set at the 2009 Copenhagen climate summit of limiting global warming to about another 3.6 degrees Fahrenheit (2 degrees Celsius) above current levels.

In a draft report last month the United Nations' Intergovernmental Panel on Climate Change said it is looking more likely that the world will shoot past that point and by mid-century temperatures will increase by about another 3.6 degrees Fahrenheit (2 degrees Celsius) compared to temperatures from 1986 to 2005. And by the end of the century that scenario will bring temperatures about 6.7 degrees warmer (3.7 degrees Celsius), it said.

"We know without any doubt that our climate is changing and our weather is becoming more extreme due to human activities such as the burning of fossil fuels," Jarraud said. "Time is not on our side, for sure."

To address the challenge, U.N. Secretary-General Ban Ki-moon has invited heads of state and other leaders to a Sept. 23 climate change summit in New York on the sidelines of the annual U.N. General Assembly. President Barack Obama has said he will attend to help spur new commitments from governments, industry and civil groups for reducing greenhouse gas emissions ahead of next year's global climate talks in Paris.

The WMO report Tuesday said the rate of ocean acidification, which comes from added carbon absorbed by oceans, "appears unprecedented at least over the last 300 million years."

Between 1990 and 2013, carbon dioxide and other gas emissions caused a 34 percent increase in the warming effect on the climate, the report said.

The warming effect, or "radiative forcing," measures the net difference between the sunlight that the Earth absorbs and the energy it radiates back into space. More absorption leads to higher temperatures.

After carbon dioxide, methane has the biggest effect on climate. Atmospheric concentrations of methane reached a new high of 1,824 parts per billion in 2013, up 153 percent from pre-industrial levels of about 700 parts per billion.

About 40 percent of the methane comes from natural sources such as termites and wetlands, but the rest is due to cattle breeding, rice agriculture, fossil fuel burning, landfills and incineration, according to the agency.