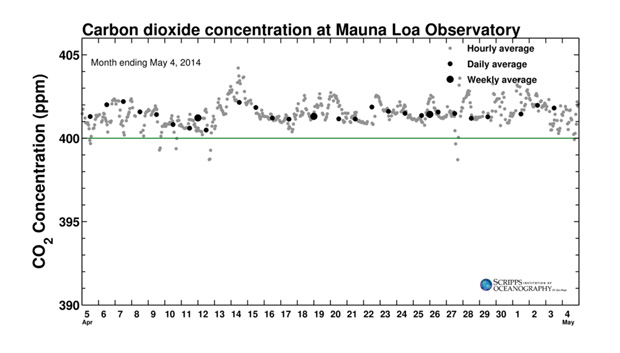 Less than a year after scientists first warned that the amount of carbon dioxide in the atmosphere could rise above 400 parts per million and stay there, it has finally happened.

For the first time in recorded history, the average level of CO2 has topped 400 ppm for an entire month. The high levels of carbon dioxide is largely considered by scientists a key factor in global warming, according to the National Oceanic and Atmospheric Administration's (NOAA) Earth System Research Lab.

The Scripps Institution of Oceanography, a part of the University of California, San Diego, reported that April's average amount of CO2 was 401.33 ppm, with each day reading above 400 ppm, reports USA Today.

According to the Institute, CO2 levels have not surpassed 300 ppm in 800,000 years. It is estimated that during Earth's ice ages, the C02 levels were around 200 ppm, with warmer periods -- as well as prior to the Industrial Revolution -- having carbon dioxide levels of 280 ppm.

Past levels of CO2 are found in old air samples preserved as bubbles in the Atlantic ice sheet, according to Scripps.

Throughout the year, there are changes in CO2 levels that occur naturally from the growth of plants and trees. Carbon dioxide levels often peak in the spring due to plant growth, and decrease in the fall when plants die, according to NOAA. However, human CO2 production has exacerbated the effects, causing global warming and climate change.

Scientists have been measuring the levels of carbon dioxide over the past fifty years. Since 1958, the Keeling Curve -- named after developer Charles Keeling -- has been used to monitor the levels of greenhouse gasses atop Hawaii's Mauna Loa. When Keeling first started monitoring CO2 levels, the amount of carbon dioxide present in the atmosphere was 313 ppm.

After Keeling's death in 2005, his son Ralph, a professor of geochemistry and director of the Scripps CO2 Program, continued the measurements. In a statement last year, he warned that CO2 levels would "hit 450-ppm within a few decades."