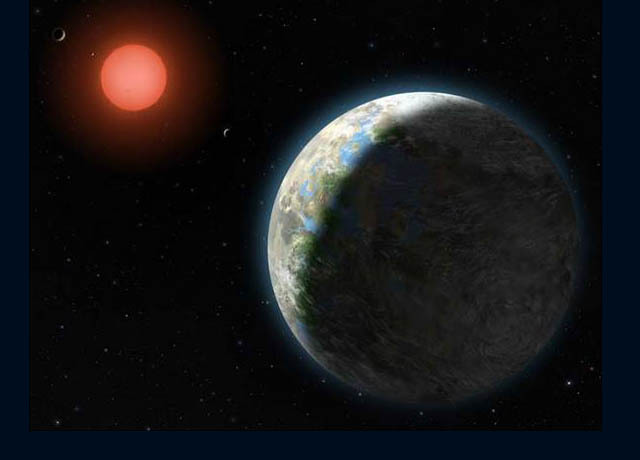 (SPACE.com) The controversial exoplanet Gliese 581g is the best candidate to host life beyond our own solar system, according to a new ranking of potentially habitable alien worlds.

Gliese 581g shot to the top of the list -- which was published Thursday (July 19) by researchers at the University of Puerto Rico at Arecibo's Planetary Habitability Laboratory (PHL) -- after a new study marshaled support for its long-debated existence.

The exoplanet was discovered in September 2010, but other astronomers began casting doubt on its existence just weeks later. Now Gliese 581g's discoverers have rebutted their critics' charges in a new paper, and have done so effectively enough to get the PHL onboard.

This rocky world -- if it does indeed exist -- is just 20 light-years away from our solar system. It's likely two to three times as massive as Earth and zips around its parent star, the red dwarf Gliese 581, every 30 days or so. [Gallery: The Strangest Alien Planets]

This orbit places the planet squarely in the star's "habitable zone" -- that just-right range of distances where liquid water, and perhaps life as we know it, could exist.

Gliese 581g has at least four, and possibly five, planetary neighbors. The team that spotted Gliese 581g also detected another planet, known as 581f, circling much farther away from the star. But scientists are still arguing about that world's existence, too.

Gliese 667Cc, which was discovered in February 2012 by the same core team that spotted Gliese 581g, orbits a red dwarf 22 light-years away, in the constellation Scorpius (The Scorpion).

The alien world is a so-called "super Earth" that's at least 4.5 times as massive as our planet, and it completes an orbit every 28 days. At least one other planet resides in the 667C system.

Gliese 667Cc's parent star is part of a triple-star system, so the planet's night sky would probably be a sight to behold.

Kepler-22b was spotted by NASA's planet-hunting Kepler space telescope, which has detected more than 2,300 potential exoplanets since its March 2009 launch. Only a small number have been confirmed so far, but the vast majority should end up being the real deal, researchers have said.

Kepler-22b, whose discovery was announced in December 2011, is a super Earth about 2.4 times as wide as our planet. If the greenhouse effect operates on Kepler-22b like it does on Earth, the alien world would have an average surface temperature of 72 degrees Fahrenheit (22 degrees Celsius), researchers have said.

The exoplanet is found about 600 light-years away, and it orbits a star very much like our own sun.

HD 85512b is another super Earth, one that's thought to be about 3.6 times as massive as our planet. The alien world is found about 35 light-years from us, in the direction of the constellation Vela (The Sail).

Astronomers announced the discovery of HD 85512b -- and about 50 other alien planets spotted by the HARPS spectrograph on a telescope in Chile -- in September 2011. The planet's estimated average surface temperature is 77 degrees Fahrenheit (25 degrees Celsius).

This world, which is about seven times as massive as Earth, orbits a bit farther out than its planetary sibling Gliese 581g.

When 581d was first discovered in 2007, many scientists regarded it as too cold to be potentially habitable. In the years since, however, atmospheric-modeling studies have suggested that the planet may indeed be able to support life as we know it -- provided 581d is warmed by a greenhouse effect.

To determine if this the case, researchers will likely need to study the planet's atmosphere directly. That sort of work could be years off, since it would probably require the development of new and advanced telescopes.