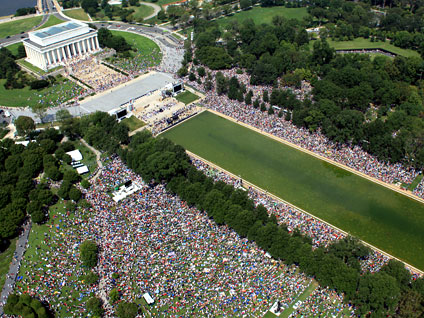 As part of our coverage of Glenn Beck's "Restoring Honor" rally Saturday, CBS News commissioned the company AirPhotosLive.com to offer an independent estimate of how many people showed up for the event. AirPhotosLive.com calculated that there were approximately 87,000 people there, plus or minus 9,000 people. It was the only scientific estimate made of the number of people at the rally.

The estimate generated criticism from conservative bloggers as well as from Beck himself, who suggested the rally attracted at least 500,000 people.

"The media can diminish the crowd side all they want, but the images speak for themselves," Beck said on his Fox News show Monday.

In order to bring more clarity to the crowd estimation process, Hotsheet asked Curt Westergard, the president of AirPhotosLive.com, to discuss his methods. Westergard's company has done aerial imaging for the U.S. border patrol, the Department of Homeland Security, companies building skyscrapers and cell phone companies trying to decide where to build their towers, among others.

"People hire us to get a really detailed view of what's on the ground," he said.

The company sometimes uses these images for crowd estimates, both generating its own estimates and partnering with Professor Stephen Doig of Arizona State University, a Pulitzer Prize winning journalist and crowd estimate expert, to come up with figures. For President Obama's inauguration last year, the company worked with Doig and GeoEye satellite data to generate a crowd estimate on behalf of CNN that was cited by the Associated Press and other news outlets.

To calculate attendance at the Beck rally, AirPhotosLive.com used what is called a surveillance aerostat balloon to take pictures from both above the event and closer to the ground. In the video above, which was provided by the company, you can see some of the images used to come up with a figure.

The balloon, Westergard said, gave the company the capacity to move up and down, allowing it to photograph people who were standing beneath trees in addition to taking photos from high above.

"We took a lot of shots under the trees and higher up by just changing the balloon altitude," he said. "So what might have been a negative with an airplane and certainly a negative with a satellite was a very strong position with a balloon."

Though there was restricted airspace on the south side of the reflecting pool, airspace was not restricted where the crowd was gathered, allowing the company to position the balloon in "the very center of the crowd - dead in the middle of it," Westergard said.

The photos were taken at noon, which Beck's representatives suggested would be the peak of the event, which ran from 10 AM to slightly after 1 PM. Taking the pictures then meant counting both those who were late to the event because of subway or traffic delays and those who left early to avoid the crowds afterward.

The company generated its own estimate and asked Doig to separately one on his own. Though Doig and AirPhotosLive.com employ slightly different methodologies, both use a method that involves laying grids over the high-resolution images and counting the density per unit of each grid cell. Westergard provided the image below to help show how the estimates are made. It's of a Tea Party Express event on April 15th that the company calculated attracted 4,436 people.

In a blog post, Doig, writing from Portugal, noted that he estimated the crowd at Mr. Obama's inauguration at roughly 800,000 - a number critics assailed as too low.

"Crowd counting, particularly of political events, always is controversial," he wrote. "The organizers of the event inevitably hype their crowd estimate -- often grossly -- to demonstrate the popularity of their cause, and opponents inevitably underestimate to fit their own agenda. Because of the wild pre-inauguration predictions of how many would attend in person -- up to 5 million! -- my reality-based estimate was ignored by many left-wing commentators and embraced by those on the right."

He added: "The frothing underscores the problem with hyped predictions of crowd size. Organizers and supporters are forced to insist loudly that the actual crowd met or exceeded their expectations, for fear that the realistic estimate will be painted as a disappointment. The time-honored way to dismiss scientific estimates that don't reflect the pre-event hype is to claim political bias on the part of those doing the estimate. I am amused to see that those who embraced my Obama inauguration estimate as soberly realistic are now attacking the Beck rally estimate, produced using exactly the same methods, as deliberately biased."

On his Fox News show, Beck used an Associated Press photo taken from the Washington Monument to support his claim that there were at least 500,000 people at the event. He said that, looking at the photo, it was obvious that a nearly mile-long area was nearly completely filled with people, evidence that the CBS News-commissioned estimate was far too low.

But Westergard said it's a mistake to try to count crowds that way, and noted, as you can see in the video above, that people bunched in front of jumbo-trons and did not tightly fill out the entire area.

"You really have to have a position overhead to count it well, and if you use a very oblique angle from the top of the Washington Monument, the sparse areas - and there were many because of people with blankets and chairs - tend to look more dense because you're looking at it from the edge," he said. "We instead are looking at it from above. And that perspective is essential. Anything less than that is sort of like guessing how many people are in a line by just looking at them through a doorway, for example."

Westergard, who said he has received hundreds of hate mails and angry phone calls over the estimate of the Beck rally, also pointed to this link showing roughly 400 photos the company took at the rally, arranged spatially. Many of these photos were used in generating the two estimates.

Check out two pictures of the Glenn Beck rally below: