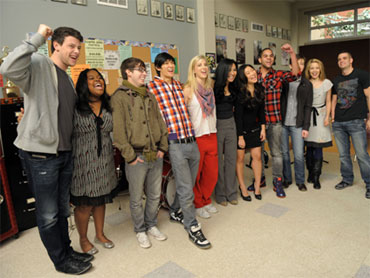 The mood on the set was appropriately gleeful.

The musical-dramedy "Glee" got some serious Golden Globe love Tuesday, with more nominations than any show. Among the Fox series' four nominations: best television series - comedy or musical.

On the Paramount Studios lot, where "Glee" is filmed, the show's cast could be found Tuesday hugging and laughing after hearing the news.

"Amazing," said Corey Monteith, who plays football hunk Finn Hudson. "It is kind of like it is like Christmas morning."

Besides the nod to the series, "Glee" received nominations for Matthew Morrison and Lea Michele, two Broadway veterans who are TV newcomers. Veteran stage and screen actress Jane Lynch also earned a bid for best supporting actress in a series, miniseries or movie.

"I slept through (the nominations announcement)," Lynch said. "But, I got up to six messages and went, 'Ah! I wonder if there is some good news for us?' And there was. My agent called me three times and said, 'Why aren't you up?' So, yeah. I called my mom, and she said, 'The golden what?"'

Michele said she and her mother used to dress up just to watch awards shows at home. So, no surprise that Michele was at a loss for words upon hearing of her nomination.

"I can't, I can't even believe it," said Michele, also a Drama Desk nominee for "Spring Awakening." "My mother just said to me, 'When I get out of this shock, I will congratulate you properly.' I think when I snap out of this shock, I don't know when it is going to happen, but if someone here hears a scream somewhere in L.A. at any point, it is probably me finally realizing what actually is happening."

"You know, it is like a high-school prom," he said. "And I remember when I was in high school I was the president of the Meryl Streep fan club. So, when we won for `Nip/Tuck,' and I got up to accept it, there was Meryl Streep right in front of me. So, it always feels like a very fun evening. I think I will be wearing Tom Ford, maybe. I think. And I don't know who my date is going be. I'm open. I need some calls. I need some bribes."

Murphy and his cast are busy filming the second half of the first season of "Glee." New episodes won't be unveiled until spring 2010, including an all-Madonna episode and an appearance by "Wicked" Tony winner Idina Menzel.

"OK, listen. We had Kristin (Chenoweth, Menzel's "Wicked" co-star), now Idina's coming," gushed actor Chris Colfer. "I can't even fathom that. I can't even talk about it. I am so, so excited."

The 67th annual Golden Globe Awards will be presented Jan. 17.
By Michael Cidoni