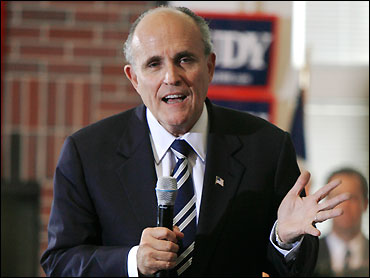 By The Politico's Roger Simon.

Rudy Giuliani said if a Democrat is elected president in 2008, America will be at risk for another terrorist attack on the scale of Sept. 11, 2001.

But if a Republican is elected, he said, especially if it is him, terrorist attacks can be anticipated and stopped.

"If any Republican is elected president — and I think obviously I would be the best at this — we will remain on offense and will anticipate what [the terrorists] will do and try to stop them before they do it," Giuliani said.

The former New York City mayor, currently leading in all national polls for the Republican nomination for president, said Tuesday night that America would ultimately defeat terrorism no matter which party gains the White House.

"But the question is how long will it take and how many casualties will we have?" Giuliani said. "If we are on defense [with a Democratic president], we will have more losses and it will go on longer."

"I listen a little to the Democrats and if one of them gets elected, we are going on defense," Giuliani continued. "We will wave the white flag on Iraq. We will cut back on the Patriot Act, electronic surveillance, interrogation and we will be back to our pre-Sept. 11 attitude of defense."

He added: "The Democrats do not understand the full nature and scope of the terrorist war against us."

After his speech to the Rockingham County Lincoln Day Dinner, I asked him about his statements and Giuliani said flatly: "America will be safer with a Republican president."

Giuliani, whose past positions on abortion, gun control and gay rights have made him anathema to some in his party, believes his tough stance on national defense and his post-Sept. 11 reputation as a fighter of terrorism will be his trump card with doubting Republicans.

"This war ends when they stop coming here to kill us!" Giuliani said in his speech. "Never, ever again will this country ever be on defense waiting for [terrorists] to attack us if I have anything to say about it. And make no mistake, the Democrats want to put us back on defense!"

Giuliani said terrorists "hate us and not because of anything bad we have done; it has nothing to do with Israel and Palestine. They hate us for the freedoms we have and the freedoms we want to share with the world."

Giuliani continued: "The freedoms we have are in conflict with the perverted, maniacal interpretation of their religion." He said Americans would fight for "freedom for women, the freedom of elections, freedom of religion and the freedom of our economy."

Addressing the terrorists directly, Giuliani said: "We are not giving that up, and you are not going to take it from us!"

The crowd thundered its approval.

Giuliani also said that America had been naive about terrorism in the past and had missed obvious signals.

"They were at war with us before we realized it, going back to '90s with all the Americans killed by the PLO and Hezbollah and Hamas," he said. "They came here and killed us in 1993 [with the first attack on New York's World Trade Center, in which six people died], and we didn't get it. We didn't get it that this was a war. Then Sept. 11, 2001, happened, and we got it."
By Roger Simon
TM & © 2007 The Politico & Politico.com, a division of Allbritton Communications Company