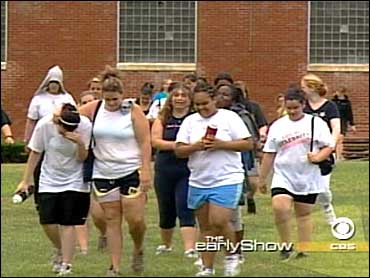 The already difficult task of losing weight and keeping it off can be even more daunting for children, especially girls also growing up with the social stigma of being overweight.

But as The Early Show medical correspondent Dr. Emily Senay found out in part two of her series on obesity, some are learning to cope at a summer camp that teaches weight-control skills to last a lifetime.

At Camp Pennbrook, a summer weight-loss camp in Pennsylvania, girls shed the pounds the old-fashioned way.

The goal is to educate girls in the skills they need to lose weight and keep it off. Lessons in cooking, nutrition and portion sizing are all part of the program.

Devon notes, "You can't go and say, 'I'm going to have this huge cheeseburger and I'm going to be fine because I did five minutes of exercise.' You really have to balance it out; you have to say, 'I can't eat this whole thing,' or 'If I do, I have to make up for it.'"

For many of these girls, being overweight is not the only challenge.

Deana Dudley, 17, admits, "I was, I guess, kind of depressed; I was unhappy with myself; didn't want to do anything about it, but kept on eating. I didn't want to work out."

Camp director Jackie Sorkin leads by example. She first came to Camp Pennbrook as a teenager weighing 300 pounds. Now she is a role model for a new generation.

Says Sorkin, "I think that the way they can remain successful - with keeping the weight off and continuing to lose weight until they get healthy, or to that healthy point - is through encouraging them and building their self-confidence and building their self-esteem. When that trigger clicks for the girls, 'Oh my gosh, it's not just about food, it's about control and it's about emotional issues in my life,' I think they get it."

Weight control is a really difficult struggle for some people. The camp says most girls manage to lose weight during their time at the camp, but admit that many regain it during the rest of the year.

The message, however, is definitely getting through to a lot of the campers. Many of the girls are so inspired by their experience that they come back as counselors when they're older, and the camp boasts that 75 percent are able to keep off at least some of the weight they lose.