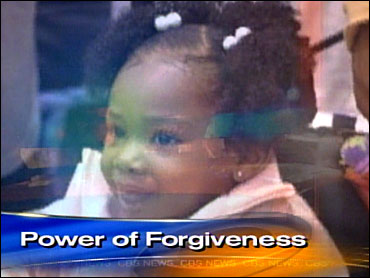 Kai Leigh Harriott has a miraculous spirit. Four years ago, at the age of 3, she was shot in the back and paralyzed from the waist down. But she refuses to be angry.

On Monday's The Early Show, national correspondent Tracy Smith reported on Kai and her family's unparalleled ability to forgive.

On the night of Kai's tragic injury, she was playing on her porch in Dorchester, Mass., with her sister, Aja. A man named Anthony Warren got into an argument in the street and fired three gunshots into the air.

Aja tried to protect her sister, but, when she brought Kai into the house, she noticed a pool of blood. A bullet had shattered Kai's spine, sparing her life, but taking away her ability to walk.

While Kai spent four months in a rehabilitation center after being shot, her mother Tonya, acclimated herself to seeing her daughter in a wheelchair. "It was so good to see her sitting up (in a wheelchair) and she looked so pretty, she was so little, but I got so sick I couldn't look at her," Tonya said.

Three years following Kai's incident, a trial date was scheduled for Warren. Kai, who was 5 at the time, volunteered to attend the trial. In an emotional moment, Kai took the stand and spoke directly to her shooter.

"Anthony Warren, what you did was wrong, but I still forgive you," she said.

Kai's courageous stand moved the court, as well as Warren. Her words influenced him to change his not guilty plea to guilty, and he accepted his punishment.

In another moving moment in court, Warren, sentenced to 13 to 15 years in prison, reached out to shake Tonya's hand as he was being led out of the courtroom. Tonya said, "He apologized and his words will never come out of my heart because it wasn't a sentence that meant vindication. It was his apology."

Tonya said that she hugged him and told him that God had given him a second chance and that he should take advantage of it.

Tonya can't explain it, but she's never felt malice towards Warren. "I've never had anger," she said. "I don't know why I was given this cup to drink, but I never had anger for him."

Kai stressed how important it has been to her to forgive Warren. She hopes that other children like her can be just as forgiving. She said, "It's kind of hard (to forgive), but, as soon as you do it, it's not that hard anymore."

Doctors say that Kai will never walk again, but Tonya believes that God will heal her daughter someday. Kai also dreams of standing up on her own in the future.

For more information and to help support Kai, visit She Shall Walk Again.