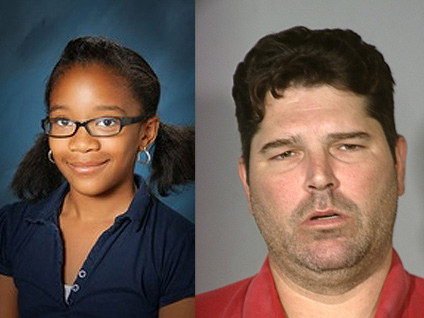 LAS VEGAS - A 12-year-old girl dressed up for a night of trick-or-treating was struck and killed by a suspected drunken driver as she crossed a Las Vegas street on Halloween night, and Nevada law enforcement agencies were scheduled to host a news conference on pedestrian safety late Wednesday.

Faith Love's death marked the third auto-pedestrian fatality in recent days in the area, and served as a reminder of the potential dangers of sending children off into the night to collect treats.

The girl's mother, Rocquell Love, told the Las Vegas Review-Journal that the family initially planned to spend the holiday with church friends, but Love opted to send her daughter with a group of cousins under the care of an aunt after her six-year-old son got sick.

A witness to the accident, 15-year-old Aaron Francois, was trick-or-treating with his brother when he saw the 2009 Mazda RX-8 hit the girl. The car appeared to be traveling much faster than the 25 mph speed limit in the residential neighborhood.

The 41-year-old driver, Justin Caramanica, was arrested on a felony drunken driving charge and was being held at the Clark County jail. A court hearing has been scheduled for early Thursday morning.

Love said her daughter was dead by the time she arrived at the hospital Monday night. She said she doesn't blame her sister for her daughter's death.

"She feels because she was with her, she should have been able to take care of her and protect her," Love told the Review-Journal.

"You know how most kids hide in the bathroom, supposed to be getting ready for school, but they're playing video games and texting?" her mother said. "My child would literally go in there with a book. She would read three or four books at a time. She just loved knowing things and learning."

Halloween is the deadliest day of the year for pedestrians.

"Here's a holiday specific to our children, they like to go out, they like to have fun, they're so many of them out in the neighborhoods and doing their trick-or-treating never thinking that they're going to lose their life because someone has chosen to drive under the influence," said Sandy Heverly with Stop DUI.

Love is the second you person to die in a pedestrian accident in the Vegas area in the span of just a few days. High school freshman Luca Ruiz-Brenes was hit and killed while crossing a street to his friend's home. The driver in that crash, 77-year-old Imre Dayka, was arrested and charged with felony DUI.

Neither child was in a crosswalk because there was not one nearby, reports CBS affiliate KLAS Las Vegas. But police say the law refers to implied crosswalks which include pedestrians crossing at corners or intersections.