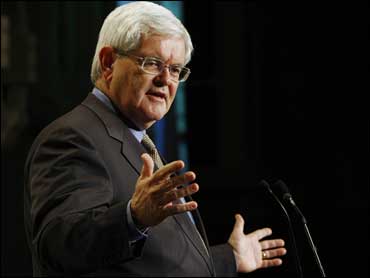 Former House Speaker Newt Gingrich will not run for president in 2008 after determining he could not legally explore a bid and remain as head of his tax-exempt political organization, a spokesman said Saturday.

"Newt is not running," spokesman Rick Tyler said. "It is legally impermissible for him to continue on as chairman of American Solutions (for Winning the Future) and to explore a campaign for president."

Gingrich decided "to continue on raising the challenges America faces and finding solutions to those challenges" as the group's chairman, Tyler said, "rather than pursuing the presidency."

Over the past few months, Gingrich had stoked speculation he might enter the crowded GOP field, despite the seemingly insurmountable challenge of entering the race several months after the other Republicans have been running.

He noted that GOP voters, especially conservatives, remain unhappy with the candidates and acknowledged that the much-anticipated entry of former Tennessee Sen. Fred Thompson into the race had been bumpy.

Yet he also has spoken positively of Thompson and the other leading contenders, including former New York Mayor Rudy Giuliani, former Massachusetts Gov. Mitt Romney and Arizona Sen. John McCain.

On Friday, Gingrich told The Politico's Mike Allen the he would open a website by Monday in an effort to round up the $30 million in pledges that he says would be his ticket to entering the race.

"If by Nov. 1, there is sufficient interest that you could be competitive financially, I would seriously consider running. I think you have to have $30 million in pledges or you just can't start, because [former] Governor [Mitt] Romney can just drown you. He can do what [John] Kerry did last time, except he can do it out of his own checking account. He doesn't have to mortgage his wife's house," Gingrich told Allen.

He abruptly dropped the idea Saturday, apparently unwilling to give up the chairmanship of American Solutions, the political arm of a Gingrich's lucrative empire as an author, pundit and consultant.

American Solutions, a tax-exempt committee he started last October, has paid for Gingrich's travel and has a pollster and fundraiser on staff. The outfit has raised more than $3 million, mostly from two benefactors who each gave $1 million: Sheldon Adelson, chairman and chief executive of the Las Vegas Sands Corp., and North Carolina real estate developer Fred Godley.

Gingrich makes hundreds of speeches each year, many paid. He will not say how much he charges, and neither will the Washington Speakers Bureau, which books him. But some clients have said they paid $40,000 for a speech.

He also has a contract with Fox News for commentaries and specials; Fox said it does not disclose the terms of its contracts. Gingrich also is a senior fellow at the conservative American Enterprise Institute.

Gingrich has a daily radio broadcast on more than 400 stations, and he writes a free online newsletter with 200,000 subscribers that is distributed by the conservative news magazine Human Events.

He also has a for-profit think tank, the Center for Health Transformation, which grew out of the consulting firm he started after leaving Congress in 1999.

Gingrich quit Congress when his party, after spotlighting President Clinton's affair with Monica Lewinsky, lost seats in the 1998 elections. The next year, Gingrich's involvement with a congressional aide, Callista Bisek, led to his divorce from his second wife, Marianne; he later married Bisek.

Gingrich, 64, tried to rehabilitate his image this year by admitting publicly to his extramarital affair during the Clinton impeachment scandal. He made the admission in an interview last month with Focus on the Family founder James Dobson, and he won praise for the acknowledgment from another conservative Christian leader, the Rev. Jerry Falwell.