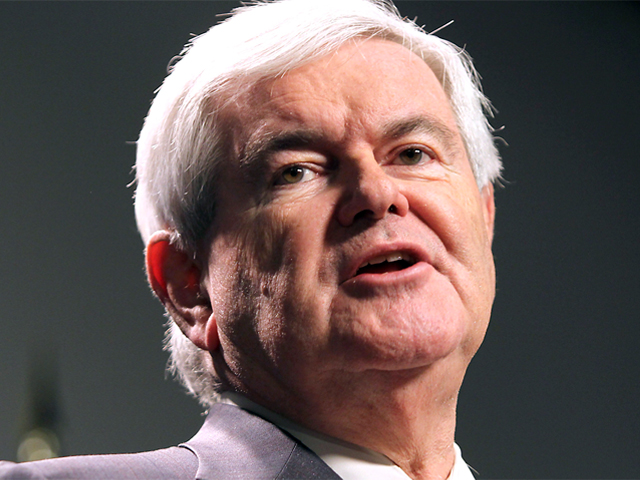 CHARLESTON, S.C. - Seeking to preserve his GOP frontrunner status amid charges from some Republicans that he's too soft on immigration, Newt Gingrich expressed support on Monday for South Carolina's controversial law aiming to stop illegal immigration in the Palmetto State.

The South Carolina law - which has prompted a Justice Department lawsuit joined by 16 nations -- would require law officers who make traffic stops to call federal immigration officials if they suspect someone is in the country illegally. Opponents say the measure would encourage racial profiling.

"South Carolinians have actually passed a law that I think is a pretty reasonable law - that basically says if you pull somebody over for legitimate reasons, you can ask them whether or not they're a citizen," Gingrich said in a town hall at the College of Charleston. "This is the opposite of sanctuary states. Think of it as enforcement society rather than a sanctuary society."

At last week's Republican presidential debate, Gingrich drew fire when he voiced support for allowing long-term illegal immigrants to stay in the country -- a proposal that presidential rivals Mitt Romney and Michele Bachmann were quick to characterize as amnesty. He has said in response that he considers it the only "humane" option and that the charge he backs amnesty is "totally false."

The former House speaker also laid out his immigration plan, which includes completing a border fence with Mexico by January 2014, making English the official language of government and emphasizing an understanding of U.S. history as a requirement of citizenship. He also said he would seek to loosen deportation requirements, particularly in cases involving gang members and criminals.

But in typical Gingrich fashion, he proposed a quirky innovation - having credit card companies such as American Express and Visa handle immigration visa applications. Calling the idea "quite serious," he said it would reduce fraud.

Gingrich is spending several days campaigning in South Carolina, always a key state in the GOP primary process. He has a solid lead in polls in the deeply conservative state over Romney and has benefitted from rival Herman Cain's recent controversies, most recently an Atlanta woman's charge that she had a 13-year affair with Cain.

On other topics, Gingrich drew applause at the event - hosted by Rep. Tim Scott, R-S.C. -- when he declared that the controversial terrorist interrogation tactic known as waterboarding "is by every technical rule not torture."

"Waterboarding is actually something we've done with our own pilots in order to get them used to the idea of what interrogation will be like," he said. "I'm not saying it's not bad and it's not difficult and it's not frightening, but I'm just saying under the normal rules internationally it's not torture. I think the right balance is to say a prisoner can only be waterboarded at the direction of the president in a circumstance when the information was of such great importance that we thought it was worth the risk of doing it - and I do that frankly only out of concern for world opinion. We are not going to be intimidated against defending America by the ACLU."

In an earlier interview on Fox News' "The O'Reilly Factor," Gingrich took on another topic that has drawn him criticism - the environment.

Asked by host Bill O'Reilly if he supports the idea - rejected by most conservatives but prevalent among scientists -- that humans are responsible for accelerating global warming, Gingrich said, "I don't think we know. I think the evidence is not complete. And we're a long way from being able to translate a computer program [predicting future warming] into actual science."

What to know about COP26, the U.N. climate summit
Sarah Huisenga