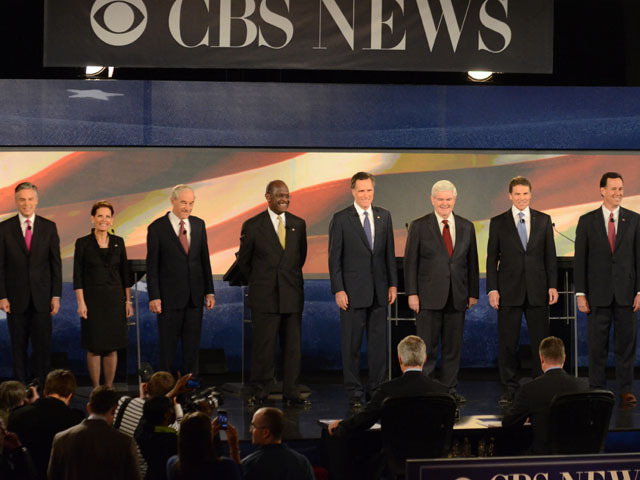 Former House Speaker Newt Gingrich and former Massachusetts Gov. Mitt Romney on Saturday agreed with the Obama administration's decision to kill Anwar al-Awlaki, the American citizen who was accused of turning on the United States and recruiting terrorists for al Qaeda.

"The correct thing in an act of war is to kill people who are trying to kill you," Gingrich said at the CBS News

Al-Awlaki, a U.S.-born cleric linked to al Qaeda, was killed by a CIA drone in September.

Romney told CBS Evening News anchor Scott Pelley he "absolutely" would have made the same call as Mr. Obama.

Transcript of the debate
Full video

"In this case, this is an individual who had aligned himself with a -- with a group that declared war on the United States of America. And if there's someone that's going to join with a group like al Qaeda that declares war on America, and we're in a -- in a war with that entity, then, of course, anyone who is bearing arms with that entity is fair game for the United States of America," Romney said.

Gingrich disagreed with Pelley's characterization that Awlaki was not allowed "the rule of law" because Awlaki was found guilty by a panel that made its recommendation to the president but he did not get his day in court.

Waging war on the United States is outside criminal law. It is an act of war and should be dealt with as an act of war," Gingrich said.

Texas Rep. Ron Paul said he strongly disagreed, and questioned why so many Republicans who oppose Mr. Obama's vision for Americans should get health insurance would back him on a such a fundamental issue of the rule of law.

"I don't think we should give up so easily on our rule of law," Paul said.

When Rep. Michele Bachmann tried to compare Awlaki's killing to Osama bin Laden, Paul pointed out that the two cases are not comparable.

"I voted for the authority to go after bin Laden," Paul said.

"I was upset because it took ten years because we were diverted from going after him and doing the job. But that's a lot different than assassinating American citizens. I mean, he wasn't a citizen," Paul said.

Cain on dealing with the Arab Spring