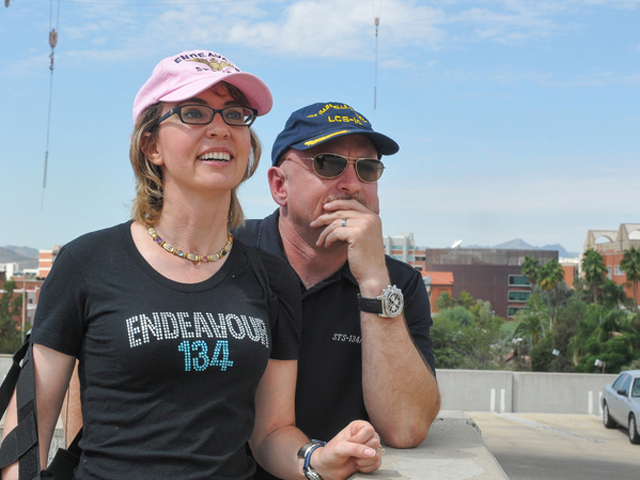 (CBS/AP) Former Rep. Gabrielle Giffords of Arizona got to witness history fly over her state.

With her husband, astronaut Mark Kelly, Giffords watched retired space shuttle Endeavour make its flight on top of a jumbo over Tucson. The shuttle was en route to California, where it landed. It will head on over to Los Angeles as it will become a museum.

The flyover was to honor Giffords, who was injured in a shooting rampage last year. Before retiring from her House seat, she was a member of the House committee on science, space and technology.

Both Giffords and Kelly watched the flyover from a parking garage at the University of Arizona. The former congresswoman was seen wearing a cap and a T-shirt that read "Endeavour 134."

"That's my spaceship," said Kelly, who was Endeavour's last commander.

Kelley said seeing the shuttle reminded him how difficult it was to land.

"Landing a space shuttle is not easy," he said. "It doesn't glide very well."

Known as the baby shuttle, Endeavour replaced Challenger, which exploded during liftoff in 1986. NASA lost a second shuttle, Columbia, which broke apart during re-entry in 2003. A replacement was not built. Fourteen astronauts died in the accidents.

Six years after the Challenger tragedy, during Endeavour's first flight, three spacewalking astronauts made a daring rescue of a stranded communications satellite. A year later, it was launched on a service repair mission to the Hubble Space Telescope.