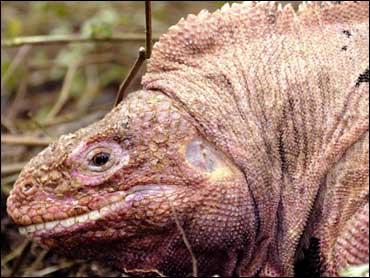 Hard to believe a giant, pink lizard could be overlooked for almost two centuries.

Charles Darwin missed it during his 1835 study of the Galapagos Islands that led to his theory of evolution. Park rangers ignored the pink and black-striped reptiles after accidentally happening upon them in 1986. Some thought the stripes were just stains.

But scientists now have documented a new species, the iguana "rosada," (pink in Spanish), which may be one of the archipelago's oldest, according to research published this week in the Proceedings of the National Academy of Sciences.

Blood and genetic tests on 36 pink iguanas - which average 3-5 feet in length - show the lizards belong to a previously undiscovered species that appears to live exclusively around Isabela Island's Wolf Volcano, an area Darwin never explored.

Researchers from the University of Rome Tor Vergata and Galapagos National Park began to investigate in 2001 whether the lizards were a different species or an adaptation for environmental or food reasons of the Galapagos' two known land iguanas: the Conolophus subcristatus and Conolophus pallidus.

But the pink iguana, it turns out, is older and likely the predecessor of the two, said Cruz Marquez, a biologist who is part of the research team. It dates back more than 5 million years, researchers say.

The pink iguana has not yet been given a scientific name.

"To discover a large vertebrate that was unknown in an area where there has been a lot of research is very special," Marquez told The Associated Press by telephone from the park.

The pink iguana population size, eating and reproductive habits are still unknown, and no young animals have been discovered, according to a park statement. Further research will determine what resources are needed to guarantee the lizards' survival.

"We need to clarify if reproduction is impeded and for what reasons," lead researcher Gabriele Gentile told the AP, noting that feral cats in the area may be eating the iguana's eggs.

The Galapagos islands, an archipelago located about 620 miles off Ecuador's Pacific coast, were protected as a UNESCO's Natural Heritage site in 1978. In 2007 UNESCO declared them at risk due to harm from invasive species, tourism and immigration.

The islands are known for their unique flora and fauna, including marine and land iguanas, blue-footed boobies and giant tortoises that live up to 150 years of age. The variety of finches on the islands inspired Darwin's theory of evolution.