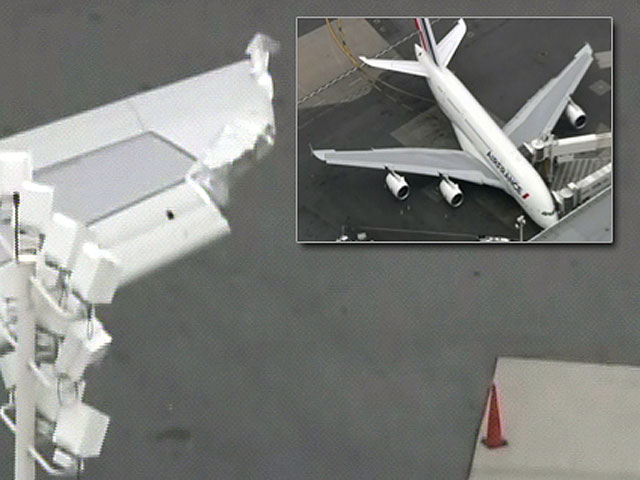 NEW YORK - The world's largest passenger aircraft clipped a much smaller commuter plane on a dark, wet tarmac at New York City's Kennedy Airport, spinning it like a toy as hundreds of passengers sat in both planes. No one was injured.

The two jets — an Airbus A380 operated by Air France and a Bombardier CRJ700 regional jet — were towed away after the collision around 8 p.m. Monday and will be inspected to determine the extent of their damage, a Federal Aviation Administration spokesman said.

"This wasn't just two airplanes bumping together. The Air France plane really creamed the regional jet," said Bill Voss, president of the Flight Safety Foundation, an industry funded group that promotes global aviation safety. "This is not something that happens every day. This is not normal."

The Airbus A380 was taxiing out to a runway when its left wingtip crashed into the tail of the regional jet, operated by Comair for Delta Air Lines and stopped on an intersecting taxiway, whipping the smaller plane around nearly 90 degrees.

How many air traffic controllers is too few?

"We were just waiting, we were kind of all having a chat saying it was a bit annoying and then suddenly, there was this big bang from one side of the plane," Clair Bandy, a Comair passenger, told CBS News.

The National Transportation Safety Board will investigate, board spokeswoman Kelly Nantel said.

An audio recording of conversations between the JFK controller responsible for coordinating the movement of planes on the tarmac and the two aircraft indicates the Comair plane was trying to exit the taxiway but may have stopped short because of congestion on the ramp — the area where planes park, Voss said.

In the dark and rain, "both pilots and controllers would have been confronted with sea of flashing lights and reflections which could partly explain why the Air France pilot may not have seen the regional jet," Voss said.

The superjumbo Airbus is so big, its wing nearly had enough clearance to make it over the smaller plane — but not quite.

Working ground control at a busy airport like JFK is one of the most demanding jobs in the nation's air traffic control system, Voss said.

"It is extremely complex, highly visual and the workload can become almost superhuman," Voss said.

In February, an air traffic controller slept for five hours on the job at an airport near Knoxville, Tennessee. Then in March, at Washington's Reagan National Airport a controller dozed off on the overnight shift, leaving two jets to land unassisted.

The most serious safety scare for the world's largest and newest jetliners occurred last year, when a Rolls-Royce engine on Qantas A380 disintegrated shortly after takeoff from Singapore, prompting Qantas to temporarily ground its fleet. A preliminary report blamed the massive engine failure on an oil leak.