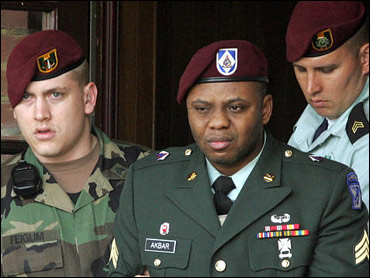 An Army sergeant was convicted Thursday by a military jury of premeditated murder and attempted murder in a grenade and rifle attack that killed two of his comrades and wounded 14 others in Kuwait during the opening days of the Iraq war.

Hasan Akbar, 34, now faces a possible death penalty, which the 15-member jury will consider at a hearing that begins Monday.

Prosecutors say Hasan Akbar, 33, told investigators he launched the attack because he was concerned U.S. troops would kill fellow Muslims in Iraq. They said he coolly carried out the attack to achieve "maximum carnage" on his comrades in the 101st Airborne Division.

The verdict came after 2½ hours of deliberations following seven days of testimony in a court-martial — the first time since the Vietnam era that an American has been prosecuted on charges of murdering a fellow soldier during wartime.

Akbar stood at attention as the verdict was read by the colonel who headed the jury panel, chewing his lip but giving no other outward sign of emotion. Defense attorneys acknowledged that Akbar carried out the attack, but argued he was too mentally ill to have premeditated it and was fueled by emotion.
Killed in the middle-of-the-night attack were Army Capt. Christopher Seifert, 27, who was shot in the back, and Air Force Maj. Gregory Stone, 40, who suffered 83 shrapnel wounds. The 101st was preparing to move into Iraq in support of the U.S. invasion when the attack occurred in March 2003.

The prosecutor said Akbar planned carefully and stole grenades that would achieve maximum destruction in the brigade command section of Camp Pennsylvania in Kuwait.

Defense attorney Maj. Dan Brookhart countered that Akbar was concerned the invasion of Iraq would result in the deaths of Muslims and that U.S. soldiers would rape Iraqi women.

He said the prosecution's depiction of Akbar as a cold-blooded killer ignored that the defendant was sufficiently mentally ill — though not insane — to be confused and fearful about the impending invasion of Iraq.

The defense lawyer scoffed at an Army psychiatrist's testimony that Akbar suffered merely from "the blues" — not any serious mental problems.

"It doesn't make any sense. This guy doesn't have the blues," he said. "He is mentally ill."

Brookhart said Akbar's actions after the initial attack showed he wasn't intent on achieving maximum destruction. He said Akbar stopped his attack with a nearly full clip still in his M-4 rifle and three more grenades. He also noted the defendant didn't try to flee during the chaos following the attack.

During Thursday's arguments, relatives of the victims cried when prosecutors showed pictures of the bodies on a large TV screen. When a prosecutor pointed at Akbar, nearly yelling that he was responsible, Akbar sipped from a coffee mug.

If sentenced to death, Akbar would become the sixth soldier on military death row at Fort Leavenworth, Kan. He also could be sentenced to a life sentence.