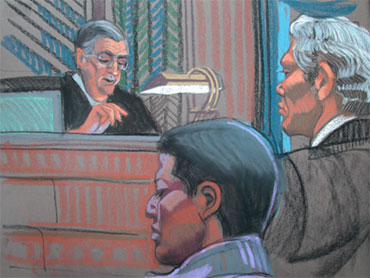 NEW YORK - In the ceremonial courtroom on the top floor of the Manhattan federal courthouse, front and center at last week's sentencing hearing for Ahmed Khalfan Ghailani was not the silent African defendant slumped at the defense table, but the gray-haired man in the black robe on the bench.

In his carefully chosen words and tough sentence, Judge Lewis Kaplan left a lasting imprint on the trial and put a personal stamp on the national debate over civilian trials versus military commissions for more than 170 terrorism detainees stuck in limbo at the military prison at Guantanamo Bay, Cuba.

Judges tend to let it all hang out at sentencing hearings. The jurors are gone. The hard work is over. They can freely offer an opinion about the players, and their word is final (pending the rarely successful appeal). A full courtroom waited to learn Ghailani's fate for his role in the dual 1998 truck bombings of American embassies in the East African capitals of Nairobi, Kenya, and Dar es Salaam, Tanzania.

Kaplan, 66, a native New Yorker and Harvard Law School graduate appointed by President Bill Clinton in 1994, knew from the start he was presiding over a test case for "high value" detainees accused of the September 11th attacks. At sentencing, the judge seemed to telegraph a message to the nation endorsing terrorist trials in federal court and announcing that in this case, again, our judicial system worked.

"He's a smart, no-nonsense judge, and I found it a pleasure to try cases in front of him because of his control of the courtroom," said David Kelley, the former U.S. Attorney for the Southern District of New York, now partner with Cahill Gordon.

Kaplan first took control over the semantics by asserting that Ghailani was indeed an "al Qaeda operative," despite his attorneys' protests that he was unaware that his actions in the spring and summer of 1998 aided the East Africa embassies plot. "I find on the basis of the trial record that he knew - or what's the same thing as a legal matter, consciously avoided knowledge - that the goal was to blow up the embassies," Kaplan said.

Then, Kaplan silenced critics of the jury's verdict by rendering the defendant's acquittal on 284 out of 285 counts all but meaningless. Ghailani's sole conviction - for conspiracy to destroy U.S. buildings and property - gave Kaplan a choice under federal sentencing guidelines to go as low as 20 years. Instead, he opted for the maximum sentence: life.

"A sentence must be imposed that, in addition to other things, makes it crystal clear that others who engage or contemplate engaging in deadly acts of terrorism risk enormously serious consequences," Kaplan said.

In determining his sentence, Kaplan went beyond trial evidence, which proponents of military commissions had worried would be limited by the strict rules of admissibility in federal court.

"What Judge Kaplan did is not unlike what judges do every day in every courthouse in this country," Kelley said. "The guidelines permit them to do that."

So Kaplan valued prosecutorial information not presented at trial, including a 1999 FBI interview of Khalfan Khamis Mohammed, a convicted Tanzania embassy bomber, who has said Ghailani obtained 100 detonators and loaded TNT onto the bomb truck Ghailani helped buy.

Kaplan also read - unlike the jury - Ghailani's admissions, according to a 2008 interview by FBI agents visiting Guantanamo, that he escorted the suicide driver of the Tanzania truck to Dar es Salaam, and that Ghailani did learn the target of his TNT purchases a week before the bombing.

"A sentencing procedure is not governed by the rules of evidence," says Joshua Dratel, who represented one of four defendants in the 2001 embassy bombings trials and two dozen defendants in terrorism cases since then. "In the United States, despite what people may think, you can be sentenced on the basis of things you were acquitted of or never even charged with."

Though the jury found Ghailani "not guilty" of 224 murder counts and charges of carrying out the bombings - he had fled Africa the day before - that did not matter to Kaplan, because the law and guidelines permitted him to look at the verdict under a felony murder theory, whereby all participants in a conspiracy can be held liable for murder when someone is killed.

"It could be a narcotics transaction, it could be a bank robbery, it could be sticking up a bodega; [if] one of the two people kills someone, all of the participants in the underlying felony typically are guilty of murder as well," Kaplan explained, "Even if they did not engage in deliberate or premeditated homicide. That's significant in this case."

Kaplan also refused to allow the debate over torture taint his trial. On the eve of opening
statements, the judge barred a potential star witness who would have told the jury he sold Ghailani that TNT, because the government learned of him only from those harsh CIA interrogations of Ghailani. At sentencing, defense attorney Peter Quijano asked the judge to "consider a sentence of less than life" partly because of Ghailani's treatment as a CIA captive after his 2004 capture in Pakistan. Kaplan declined.

"This trial has been as divorced from any questionable practice that may have been engaged in by anybody other than the defendant," said Kaplan. "This should not be taken as condoning whatever may have been done to Mr. Ghailani by our government," the judge said. "But that is a matter for another time and another place."

Perhaps most striking was Kaplan's final comment of the two-and-a-half hour hearing, when he thanked the lawyers on both sides who handled the case for the year-and-a-half since Ghailani's transfer to New York.

"I want to say to Mr. Quijano and his colleagues," the judge continued, "that their services in this case bring to mind the fact that before the American Revolution, John Adams, one of our great patriots and our second President, defended British soldiers accused of shooting down American colonists in Boston."

On March 5, 1770, soldiers shot into a crowd protesting taxation without representation, killing five colonists in what became known as the Boston Massacre. When no other attorney would, Adams - who opposed the British occupation - defended the soldiers, and won acquittals for most of them.

Kaplan continued in his comment to Ghailani's defenders, "You're part of a tradition that's older than the country."

Dratel, who is an adviser to the John Adams Project of the American Civil Liberties Union and National Association of Criminal Defense Lawyers, appreciated the compliment.

"It's good to see it articulated by the court when there is so much demagoguery in the opposite direction from people who don't understand the nature of what defense lawyers do or want to deny the unpopular accused the rights to which they are entitled," Dratel said.

The ACLU and NACDL formed the John Adams Project due to their beliefs that Guantanamo military commissions are deficient on due process and their reliance on coerced statements and hearsay is unconstitutional. Hina Shamsi, Director of the ACLU National Security Project, said the Ghailani trial "should put to rest any unfounded fears that our federal justice system cannot conduct fair, safe, and effective trials in terrorism cases, including when torture is an issue. The prosecution of Mr. Ghailani excluded evidence derived from torture - as the rule of law and American values require - and, unlike military commissions trials, resulted in a process the American people can trust."

Kaplan, who did not stop the Pentagon from terminating Ghailani's relationship with a trusted pair of JAG attorneys who represented him at Guantanamo, could see Marine Colonel Jeffrey Colwell and Air Force Major Richard Reiter seated in the public gallery.

"I want to say to Colonel Colwell and Major Reiter," Kaplan said, "You're a credit to your profession and to your uniforms."

The anonymous jury of six men and six women has not spoken since their mixed verdict in November. Based on a juror's note implying an 11-1 deadlock two days before the verdict, Kaplan has hypothesized, jurors may have compromised "so everyone could go home."

As the sentencing hearing adjourned, U.S. Marshals handcuffed Ghailani and led the 36-year-old out of the courtroom destined for his new permanent home, the "Supermax" prison in Florence, Colo.