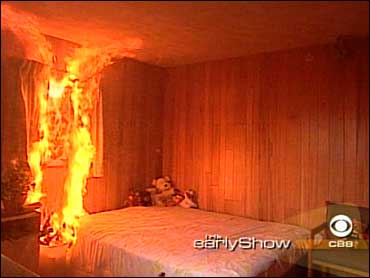 It may surprise you to learn that a house fire is reported every 80 seconds in the United States.

Some 3,000 people die in them each year in this country.

The heat alone can kill you. The smoke is deadly. And flames move very quickly.

If you woke up to the sound of a smoke alarm, would you know what to do?

She also suggested several, relatively simple safety precautions that could mean the difference between life and death for your family if flames ever hit your home.

A sprinkler, a working smoke alarm, and a plan of escape, could be the difference between life and death. You would have just minutes to get out alive, Koeppen said.

Koeppen spoke with Meri-K Appy of the Home Safety Council, who told her, "In a fire, time is your enemy. … You may only have 3 minutes to wake up snap into action and get everyone awake and get them outside. That's not a lot of time."

The council helped The Early Show set a home on fire in the Chicago suburb of Libertyville, Ill. The local fire department was standing by.

The fire was started with a lighter and some newspapers in a trash can in the living room, which is right next to the master bedroom.

Most fatal fires happen in the middle of the night while you are sleeping, Koeppen pointed out.

Less than 30 seconds after the newspapers began burning, the smoke alarm went off.

At a minute, the drapes caught fire, and everyone fled the house.

Within two minutes, the couch was on fire, flames were moving along the ceiling, and black smoke was filling the room.

In the master bedroom, whose door was closed, hardly any smoke was visible, even though a fire was raging in the next room.

But in a bedroom with the door open, smoke started to trickle in, then consumed the room. All that could be seen was the reflection of the show's camera in the window.

Back in the living room, it was almost pitch black. And it was so hot, the fire cracked the window in front of the show's camera.

All that happened in just four minutes. At that point, firefighters came through the front door and put out the blaze.

Libertyville Assistant Fire Chief Bob Kleinheinz said the fire "was probably near 1000 degrees" if it broke the glass.

The fire melted the smoke alarm.

In the bedroom with the door shut, there was no sign of fire.

Anyone in there could have survived "very easily … for quite a while," Kleinheinz told Koeppen.

But in a room down the hall, smoke damage was very evident, and Kleinheinz said anyone in there would probably have perished.

The lesson, Koeppen points out, is to sleep with your bedroom door closed, to keep the deadly smoke out.

Because time is the enemy in fires, every family needs an escape plan, experts agree.

Among its suggested components: When the smoke alarm goes off, roll out of bed and get to the floor. Crawl to your door. Feel the door's frame with the back of your hand, and touch the doorknob.

If it's cool, peek out. If it's clear, grab your phone, grab your kids, and crouch or crawl to the nearest way out. Call 911 when you're outside.

"Have a meeting place outside," added the safety council's Appy, "so you don't make that tragic mistake of going back inside for someone who may already be out."

If you crawl to your door and the knob is warm, don't open it. Use clothes or blankets to keep smoke from getting in. And go to your window. An escape ladder can help if you're trapped on the second floor. Always teach your family two ways to escape from every room.

But, says Koeppen, one of the best things you can have in your home to escape a fire is a sprinkler system.

Several communities across the nation now require new homes to be built with sprinklers.

So, The Early Show set another fire, this time in a bedroom with a sprinkler.

The drapes catch on fire, the smoke alarm goes off and, in less than 30 seconds, the sprinkler goes to work, containing the fire next to a bed.

The difference was, Koeppen observed, incredible.

"Without the sprinkler," Kleinheinz said, "the whole room would have been blackened out, a charred mess; so would the majority of the house. … (A sprinkler) is going to stop (a fire), stop it cold."

People sound asleep could make it out alive.

She says you should have a working alarm on every floor in your house, outside every bedroom, and also inside each bedroom.

It's not too expensive to put sprinklers in a new home, Koeppen continues. It's about one percent of the total cost of your home. So, if it's a 200-thousand dollar home, sprinklers would cost an additional $2,000.

To retrofit an older home with sprinkler would cost roughly 50 percent more. So, for that same $200,000 house, sprinklers would run about $3,000.

Escape plans should include each parent going for different kids.

And you should test your smoke alarms one night while the kids are sleeping to see whether they wake up.