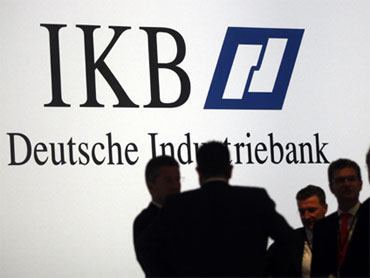 Goldman Sachs may face claims for financial compensation from European governments and investors in connection with the fraud case brought against the investment bank by the Securities and Exchange Commission.

Britain and Germany, whose governments had to bail out banks that lost money due to what the SEC says was Goldman's misbehavior, are both looking into the case, while analysts say that lawsuits from investors - against Goldman and other banks that marketed complex mortgage-backed securities - are almost inevitable.

The German Finance Ministry, the government-owned KfW development bank and IKB Deutsche Industriebank AG, which the SEC says lost some $150 million in investments marketed by Goldman, all said Monday they are looking into the case and will not rule out any option.

"After checking all facts, the public domain will examine closely if there are any possibilities for compensation, but at this point it is too early to speculate about it," Finance Ministry spokeswoman Jeanette Schwamberger told The Associated Press.

The U.S. charges against Goldman Sachs relate to a complex investment tied to the performance of pools of risky mortgages. In a complaint filed Friday, the Securities and Exchange Commission alleged that Goldman marketed the package to investors without disclosing that the pools were picked by another client, a prominent hedge fund that wanted to bet the U.S. housing bubble would burst.

Within months, most of the mortgages had been downgraded as the U.S. housing boom went into reverse and the securities fell sharply in value.

The company denies it did anything wrong, saying investor losses came from the deterioration of the whole sector, not regarding which securities were in the pool.

IKB was Germany's first victim of the financial crisis, in 2007. It had to be rescued with the help of KfW - which held a minority stake at the time it wobbled but later took over 90 percent of the troubled bank. KfW sold its share to Dallas-based Lone Star Funds in 2008, losing some euro7.2 billion ($9.7 billion) in the deal, according to KfW spokesman Wolfram Schweickhardt.

IKB said in a written statement that it will check the SEC papers and "will closely look at any possible measures." Spokesman Patrick von der Ehe told AP that means all options are on the table, but declined to elaborate.

KfW spokesman Schweickhardt said his bank also is looking into the matter and trying to get all the facts. The Finance Ministry said that, if anyone, KfW would be the one to claim compensation for the German taxpayer, according to the Finance Ministry.

"At this point it is much too early to say anything substantial," Schweickhardt said.

British interest in the case is likely to key on Royal Bank of Scotland, which paid $841 million to Goldman Sachs in 2007 to unwind its position in a fund acquired in the takeover of Dutch Bank ABN Amro, according to the SEC charges.

"As you would expect, the FSA is investigating the circumstances of this case and whether there are any implications for the U.K.-regulated entities of Goldman Sachs," the British financial regulator said in a statement.

"If there are, we will take appropriate action. We work closely with overseas regulators and will be cooperating fully with the SEC investigation."

The possibility that RBS might be able to recoup some money from Goldman Sachs helped boost the government-controlled bank's shares, which were up 2.8 percent at midday. The government holds an 84 percent stake in the bank, which nearly collapsed in large part because of its leadership of the consortium which took over the Dutch bank.

RBS spokesman Jason Knauf declined to comment. The state-backed bank says it is watching the SEC suit against Goldman closely and has not yet decided on any action.

The European Union is also keeping a close eye on the U.S. investigation.

Analysts say that civil suits in the wake of the SEC case against Goldman Sachs are inevitable - in fact some are already in motion. The Netherlands' Rabobank sued Merrill Lynch in June 2009, seeking $45 million in damages in a case it says is similar to the Goldman Sachs case.

In a letter filed Friday at New York District Court, Rabobank lawyer Jonathan Pickhardt alleges that Merrill "engaged in precisely the same type of fraudulent conduct in the structuring and marketing" of one of its CDOs as Goldman did with its Abacus CDO.

In the filing, Pickhardt said Merrill allowed an investor called Magnetar Capital LLC to select risky assets for inclusion in the "Norma" CDO - but Merrill told Rabobank the investments had been selected by an objective third party.

Magnetar then took a short position against the CDO, Rabobank says. The Dutch bank loaned the CDO $60 million, but was able to recover only a quarter of that when it went bankrupt.

Britain-based analyst Cubillas Ding of Celent said "there may well be more investors who will seek to sue."

"However, as a professional or institutional investor, you should have the necessary expertise to challenge, compare and reject the recommendations given to you," he said in an email.

He said most CDO investors would face an uphill climb in suing banks unless they can show "clear evidence of being misinformed or mislead."