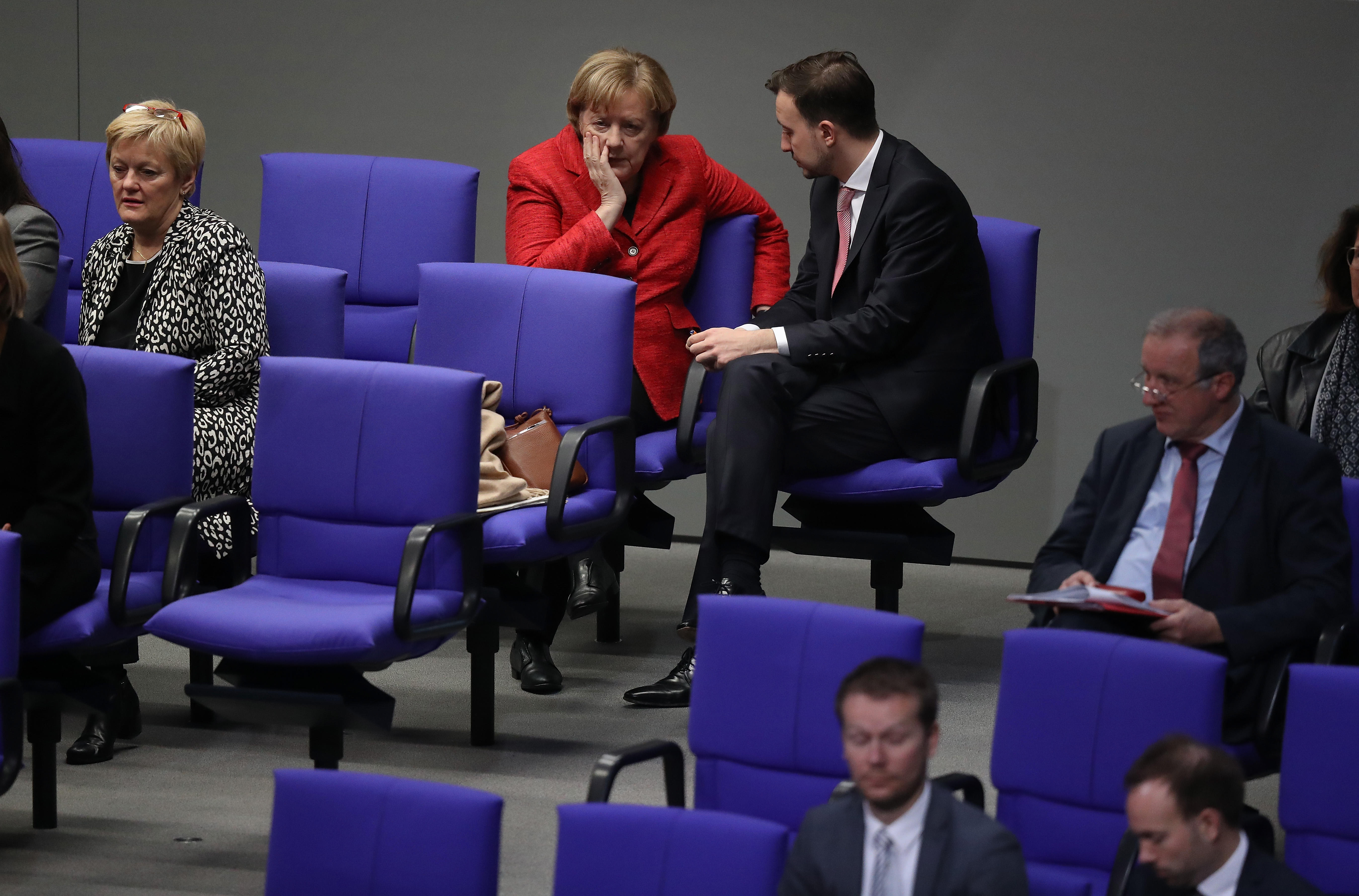 BERLIN -- Chancellor Angela Merkel's chances of cobbling together a government in Germany's current parliament look slim. But the long-time leader is already signaling that she will run in any new election and it appears far too early to start writing Merkel off.

Merkel's trademark calm was on display hours after coalition talks collapsed. She brushed aside suggestions that she was a lame duck, telling ARD television that she was "a woman who has responsibility and is ready to continue taking responsibility." Her pre-election commitment to serve another four years stands, she added.

Merkel has good reasons not to be too worried about her future for now, despite recent setbacks.

Germany's Sept. 24 election wasn't kind to Merkel's conservative Union bloc, whose vote tally of 32.9 percent was its worst since the first post-World War II election in 1949. But it was still easily the biggest group - far ahead of challenger Martin Schulz's center-left Social Democrats, whose disastrous 20.5-percent showing left them facing an uphill struggle to rebuild support.

While hardly helpful, the result hasn't yet triggered any serious questioning of Merkel's position inside the party. After 12 years as chancellor and 17 as her Christian Democratic Union's leader, the 63-year-old still has no obvious successor who could match her broad party support and appeal to a wide public, or indeed who is prepared yet to make a move against her.

"Merkel has not suffered yet," because she has "stayed true to her style of politics," said Manfred Guellner, the head of the Forsa polling agency.

Over the years, Merkel has won widespread acceptance, though not necessarily enthusiasm, with a combination of ideological flexibility, calm decision-making and personal modesty. She has been able to overcome, or at least muddle through, sticky patches - most recently, the aftermath of her 2015 decision to allow in large numbers of asylum-seekers.

While it remains unclear who will get the blame if Germans have to vote for the second time in a few months, it was the pro-business Free Democrats who walked out of coalition talks and the Social Democrats who have refused even to contemplate them.

"She is not really being called into question," said Thorsten Faas, a political science professor at Berlin's Free University. The poor election result in part reflected the fact that "it was clear to voters that Merkel would remain chancellor," so many voted for other parties or stayed home, he added.

"The Union knows very well that switching to another person now, in this awkward situation, is not an alternative," Faas said. "What can happen to her? For now, she stays in office (and) she can be comparatively relaxed about new elections."

The only other option, assuming that other parties can't be persuaded to negotiate a coalition, would be an unprecedented minority government. Merkel says she doesn't want that.

"I don't have a minority government in my plans," she said Monday. "I don't want to say never today, but I am very skeptical and I think that new elections would then be the better way."

The chancellor could benefit from a wish for stability in a new election. Or more voters could turn against mainstream parties, boosting the nationalist and anti-migrant Alternative for Germany's 12.6-percent vote share from September. Either way, it appears likely that - as in this parliament - no plausible coalition would be possible without Merkel's conservatives.

Polls so far have shown little change from the September result. It's hard to tell whether and how that will change; one potential factor is a leadership struggle inside the Christian Social Union, the Bavaria-only sister to Merkel's CDU, which has been simmering since that party performed particularly badly in the election.

On Tuesday, parliament speaker Wolfgang Schaeuble added his voice to an appeal by Germany's president, who is holding a round of meetings with party leaders, for politicians to show more readiness to compromise.

"We can be of different opinions as to how we should be governed, but it is clear that we must be governed," Schaeuble, a prominent member of Merkel's party, told lawmakers.