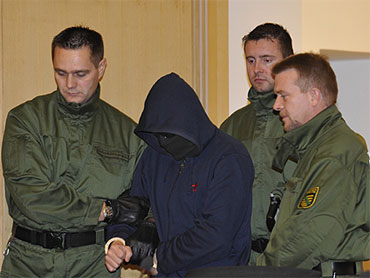 A 28-year-old Russian-born German man was found guilty Wednesday of murder and sentenced to life in prison for fatally stabbing a pregnant Egyptian woman in a Dresden courtroom, an attack that triggered outrage in the Muslim world.

The Dresden state court said in its ruling that because of the particularly brutal nature of the crime defendant Alexander Wiens would not be eligible for early release.

During the trial, Wiens admitted to stabbing Marwa al-Sherbini to death at a July 1 court hearing. Wiens had argued, however, that his actions were not premeditated and that he had no xenophobic motivation. His attorneys had sought a lesser manslaughter conviction.

Al-Sherbini, a 31-year-old pharmacist, was stabbed at least 16 times by Wiens in the Dresden courtroom where she was to testify against him. She had filed a complaint against him in 2008, accusing him of insulting her with racial slurs, calling her a "terrorist" and "Islamist" during an altercation.

Many German courts, including the one where the killing took place, have no security checks at their entrance. Prosecutors said the defendant used a kitchen knife with a 7-inch blade that he had brought into the courtroom in a backpack.

Her husband, a scientist conducting research in Dresden, was stabbed and suffered serious injuries when he intervened to protect her. The couple's 3-year-old son was in the courtroom and witnessed the attack.

Demonstrators outside the courtroom ahead of the verdict carried signs with slogans like "stop the Islam hate in Germany" and "the death of Marwa is the result of Islam hunting."

In addition to murder, Wiens was convicted of attempted murder for his attack on al-Sherbini's husband, Elwy Okaz.

In his closing arguments on Monday, prosecutor Frank Heinrich said there was no doubt of Wiens' reasons.

"It's clear that his motive was hatred for Muslims," Heinrich told the panel of judges. "Like a maniacal, cold-blooded killer, he started stabbing the woman and her husband, who was trying to protect her."

When given an opportunity to respond on Tuesday in court, however, Wiens declined to comment.

"I don't want to say anything," he told the court.

Wiens, a German citizen, was born in the Russian city of Perm and has lived in Germany since late 2003.

Egyptians expressed outrage at the attack and an initially low-key German response, which many viewed as a sign of racism and anti-Muslim sentiment.

The week after the killing, German Chancellor Angela Merkel expressed her condolences to Egyptian President Hosni Mubarak but did not comment publicly.