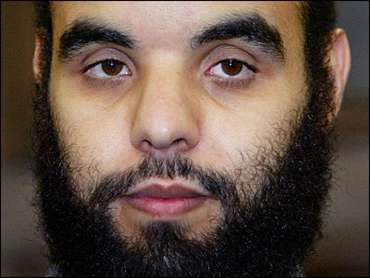 A German court on Thursday ordered a Moroccan accused of supporting the Sept. 11 al Qaeda cell in Hamburg freed from custody based on new evidence that only the three Hamburg-based suicide hijackers and their purported al Qaeda liaison were involved in the plot.

Abdelghani Abdelghani Mzoudi's four-month-old trial on charges of 3,066 counts of accessory to murder and membership in a terrorist organization continued despite the decision. Prosecutors allege he helped the suicide hijackers with logistics, and he faces a possible 15 years in prison if convicted.

The order to free Mzoudi was effective immediately, but prosecutors said they would appeal and he remained in custody. The trial was resuming Thursday afternoon. Mzoudi did not react when the order to release him after 14 months in custody was announced.

The decision came after the Federal Criminal Office, Germany's equivalent of the FBI, submitted new evidence that it received Nov. 30 suggesting that Mzoudi was not involved in the plot.

The agency did not identify the source of the statement, however Presiding Judge Klaus Ruehle said he was sure the evidence was from Ramzi Binalshibh, who has been in U.S. custody since his arrest in Pakistan on the anniversary of the attacks. Binalshibh is believed to have been the Hamburg cell's key al Qaeda contact.

"The judges have many questions about the credibility of this information, but there is no possibility to verify Binalshibh's statements," Ruehle told the court. U.S. and German authorities have refused to turn over full transcripts of the interrogation of Binalshibh, a Yemeni in U.S. custody after his capture in Pakistan last year.

"We have no doubt that Ramzi Binalshibh is the witness and assume he was intensely interrogated about the attacks," Ruehle said. "There is a serious possibility that (Mzoudi) was kept away from all knowledge of the plot."

"If there is any doubt of his innocence he has to be released," he said.

He said it would be natural for Binalshibh to protect the cell and that there is ample evidence to prove that others were involved, including fugitive Zakariya Essabar, who fled Hamburg shortly before the attacks and is wanted by Germany on an international arrest warrant.