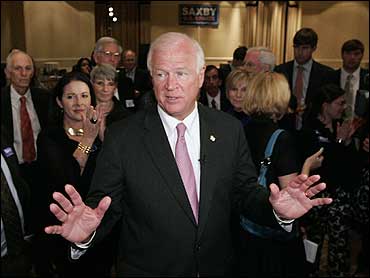 This story was written by Charles Mahtesian.

Here on the central front in the battle to capture a 60-seat, filibuster-resistant Democratic Senate majority, only one thing matters anymore-turning out the party faithful.

Since Republican Sen. Saxby Chambliss failed to break the 50 percent threshold necessary to win the seat outright on November 4, the contest has narrowed into a sprint in which both parties recognize there is only one path to victory, and that is mobilizing the base to vote in the Dec. 2 runoff.

That's why on a cold Saturday morning, close to three weeks after Election Day, Chambliss' suburban campaign headquarters is still buzzing with activity.

Roughly three dozen volunteers have arrived here, some of whom will grab cell phones from a stash in the front of the office and begin calling potential GOP voters to warn them of the liberal agenda of Chambliss' opponent, Democrat Jim Martin. The others will spend the day knocking on doors to spread the word.

It's all part of "Saxby Super Saturday," just one more way Georgia Republicans are trying to squeeze out enough votes to reelect Chambliss next week.

At one time, almost no one would have predicted the Georgia Senate race would come down to this. But Chambliss, who was coasting to reelection for most of the year, hit a rough patch in October after voting for the $700 billion Wall Street bailout. His poll numbers, in strong shape until then, began sagging.

Then, spurred by Barack Obama's historic presidential campaign, African-Americans headed to the polls in record numbers on Election Day and helped Martin hold Chambliss to 49.8 percent, which triggered a runoff between the two.

The question now is whether Martin can pull off a similar turnout feat just a few days after Thanksgiving - and without Obama on the ballot.

Either way, the president-elect is at the center of this abbreviated campaign. Martin has closely linked his efforts to Obama, running television ads that have made ample use of him - including one that features footage of Obama's victory speech in Chicago's Grant Park. Obama himself took a small step toward helping Martin by recording a radio ad urging voters to return to the polls for Martin in the runoff, which has also been used in robocalls across the state.

While it's unlikely that Obama will actually travel to Georgia to rally supporters, in the meantime, Martin is relying heavily on the president-elect's campaign infrastructure.

Obama's presidential campaign has dispatched dozens of his top field organizers from across the South, many of whom helped engineer the surprising victories in conservative-minded states such as North Carolina, Virginia and Florida. Those organizers are familiar with the racial dynamic that will be the driving force in the runoff.

All of Obama's 25 Georgia field organizers remained in the state to work on the runoff, and the 25 Obama regional offices were immediately converted into Martin for Senate campaign offices. All told, more than 100 Obama field organizers are now in Georgia working Martin's get-out-the-vote efforts, along with leading operatives who served under Democratic Senatorial Campaign Committee Chairman Charles Schumer of New York during the past election cycle.

"We had more operatives and help than we could deal with," said one leading operative working on the Martin campaign.

About a dozen Democratic field organizers were on hand when Martin paid a visit Friday afternoon to his storefront campaign offices in the Democratic stronghold of DeKalb County in suburban Atlanta, where Martin needs strong turnout to prevail.

A mild-mannered, bookish former state legislator who served in a low-profile role as the head of Georgia's Department of Human Resources, the 63-year-old Martin sometimes seems overwhelmed at all the attention he is receiving.

"This is extraordnary! This is absolutely extraordinary!" Martin said, as his campaign staffers and a smattering of supporters applauded. "You know, it's all about getting out the vote. ... This election is about who wants it more."

But the early signs are not encouraging for Martin. During the presidential election, African-Americans composed a record 30 percent of the electorate in Georgia - about 5 points higher than in the 2004 presidential campaign. And in early voting, they totaled 35 percent of the vote.

In the runoff, even as Democrats are vigorously encouraging supporters to vote early, only 22.7 percent of the 150,500 ballots so far have been cast by African-Americans.

Martin's campaign has reached out to Obama's transition team for the president-elect's help, but all indications are that Obama is busy dealing with the presidential transition and may be reluctant to expend his newly won political capital in a race where victory is far from assured. Obama may also be wary after the experience of another president-elect, Bill Clinton, who came to Georgia in a 1992 Senate runoff for Democratic Sen. Wyche Fowler.

Despite leading in the general election, Fowler didn't benefit from Clinton's visit - he lost by 16,000 votes.

On the Republican side, the campaign's focus is on suburban GOP strongholds such as Cobb County, just outside Atlanta. That area's conservative base soured on Chambliss over his bailout vote, and many of them stayed home or voted for Libertarian Allen Buckley.

While Cobb County delivered more votes for Chambliss than any other county, the senator's margins were well below expectations. Chambliss won only 53 percent of the vote there, compared with 60 percent when he ousted Democratic Sen. Max Cleland in 2002.

The GOP rallying cry has been simple: Vote Republican as a firewall to prevent Democrats from having unchecked control of the Senate.

"The fact that we'd be giving Democrats a blank check is the biggest motivator for us to get Republicans to the polls," said Cobb County Republican Party Chairman Scott Johnson. "If we have to motivate with fear, that's what you have to do to win."

Republicans have been prepared for this scenario: The Republican National Committee, already anticipating a runoff, formulated a detailed game plan one week before the November election to dispatch its resources into Georgia.

Every county has a Republican call center, with get-out-the-vote efforts concentrated in the key suburban and exurban Republican strongholds around Atlanta and Savannah. More than 3 million potential Republican voters have already been contacted.

The Chambliss campaign has raised about $4 million since the runoff campaign began, and the Republican National Committee has loaned $2 million to the National Republican Senatorial Committee to help fund the runoff. The NRSC has already aired two ads attacking Martin for being a tax-and-spend liberal and soft on crime.

But what keeps Chambliss operatives up at night is that the runoff - with its emphasis on turnout - has little to do with either candidate's performance and more to do with their own efforts to rally the base.
"My dog could have been on the ballot and would be in exactly the same position Jim Martin is today," said Tom Perdue, Chambliss' longtime political consultant. "Martin was the beneficiary of an Obama wave that swept the country. As a person, as a candidate, he's the most insignificant opponent in all my 30 years of politics. Nobody knows who he is."