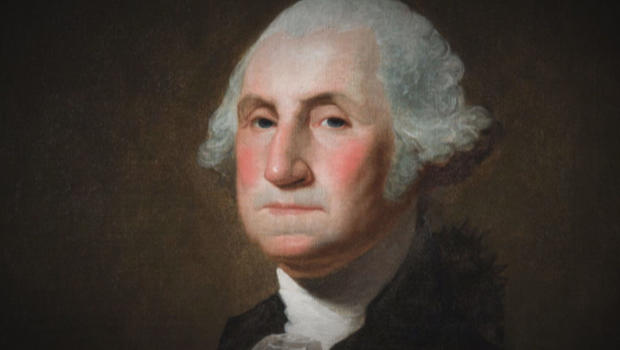 Through eight grueling years of the Revolutionary War, and another eight as the first President of the United States, George Washington was sustained by a dream … of the day he would return to Mount Vernon, his beloved plantation high above the Potomac River, where at 65 years old he aspired to a peaceful retirement as a farmer.

But that's not quite how it turned out. "He got anything but a peaceful retirement," said biographer Jonathan Horn. "His retirement was filled with controversy, intrigue, and personal torment."

Horn is the author of "Washington's End: The Final Years and Forgotten Struggle" (published by Scribner, a part of ViacomCBS), which begins where most Washington biographies end – as he rode off into the sunset.

But at Mount Vernon, he quickly became restless. Horn compares him to a lion in a cage.

"He was waiting for news from the capital of Philadelphia … he'd be pacing back and forth," Horn said. "He could go for miles on this piazza."

The year was 1798. France was attacking American ships at sea, and war with the former ally seemed imminent. Washington was named commander in chief of the new army, even though, according to the Constitution, that title belonged to President John Adams. Even though, Washington accepted the position, and just over a year after stepping down as president, he was back in Philadelphia.

"It was really hard to let go," Horn said. "He had created this country. This country is his legacy. And he's worried about what's going to happen to it."

His prized reputation took a beating, as enemies – including former friends Thomas Jefferson, James Madison and James Monroe – condemned him for acting like a king.

"So, that should dispel the idea that all of our founding fathers were good friends," said Horn.

In a remarkable parallel to today's politics, Washington's Federalist Party accused France of meddling in the presidential election at the request of Jefferson and his fellow Republicans.

The so-called quasi-war with France soon cooled off, and Washington returned to Mount Vernon. Though he was just 66 years old, he was plagued with a series of torments, including his health.

As Horn writes: "His hands are not as steady as they once were. His back stoops. His hearing has weakened but not so much that he does not hear the whispers about his senility. His memory, always bad, has become worse. His vision has declined."

But perhaps worst of all, his teeth were gone, replaced by dentures, not made of wood as the old story goes, but of ivory, animal teeth, and human teeth (possibly from enslaved people he owned). It's no wonder Washington rarely smiled.

As for his relationship with Martha Washington in those final years, Horn said, "By this time in his life he will tell you that marriage is the great joy of life."

But he and Martha were raising two grandchildren from her first marriage, and even the "Father of Our Country" struggled to keep up with the demands of parenthood. "He's constantly disappointed by Martha's grandson, George Washington Parke Custis," said Horn. "He keeps dropping out of schools. The boy promises to do better, he never actually does."

Despite his good relationship with Martha, he still appeared to have strong feelings for Sally Fairfax, a married woman he had loved in his youth.

"We know that because he wrote a letter to Sally Fairfax," said Horn, "and he said all of the things he had done in his life since then had not brought him as much joy as the time he spent with Sally Fairfax as a young man."

Other family secrets may be lost forever because, tragically for historians, Martha burned almost all of their letters to protect their privacy.

"This was home for him. It was his sanctuary," he replied.

Bradburn said, despite all the challenges here, Washington did fulfill some of his dreams: He became a pioneer of modern farming, experimenting with seeds and fertilizers, and he built one of the nation's largest whiskey distilleries.

Bradburn showed Reid Washington's study: "I like to call it his man cave. I mean, this is where he loved to do his work, massive correspondence, corresponding with people all over the world."

Successful as he was, it's important to note that Washington would have never done well as a farmer and businessman without the 300-plus enslaved people who toiled at Mount Vernon. Bradburn said that during the war Washington's views on slavery changed in part due to the heroism of black soldiers.

"He hopes there's some way that legislation will be passed to end slavery," he said.

But his actions sometimes contradicted his words. According to Horn's book, Washington said that getting work out of his slaves sometimes required "a little of the overseer's whip." He remained a slave-owner until his death.

George Washington passed away in his and Martha's bedchamber. And, sadly, what a grim death it was, from a throat infection, easily cured with antibiotics today. His doctors repeatedly bled him (the practice at the time) of about five pints of blood, which only made him weaker.

"The father of our country suffocated to death, in his bed?" asked Reid.

When death was near, he dressed in fine clothes. Surrounded by family, doctors, and slaves, his last words were simply: "'Tis Well." George Washington was 67 years old.

"He went out in that sort of stoical fashion that he wanted to project," said Bradburn, "and he knew people would be telling this story for centuries. And so, he wanted to do it in style."

George Washington let go of life like he let go of political power: bravely, and with one eye on history.