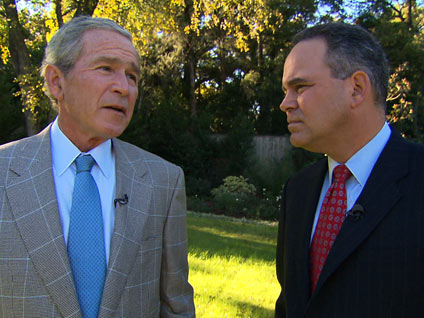 When the men who've been president leave the White House, in certain respects they shrink.

Party affiliation has nothing to do with it. Neither do approval ratings. I've seen it personally with each our three most recent former presidents. And I suspect what happened to them, happens to them all.

They're not diminished as human beings, necessarily. Nor as historical figures. For many, they continue to maintain their heroic proportions. For others, they remain the subject of out-sized vilification. But it's inevitable. The Oval Office imparts a certain larger-than-life sensibility. When they leave, to some extent they become life-sized again.

After a visit and an interview last Friday at his home in Dallas, it seems to me George W. Bush couldn't be more pleased that he's once again living a more normal-sized existence.

He met us in the foyer of his new home in Dallas, coffee mug in hand. While his wife got her final touch-ups with her hair and make-up, Mr. Bush seemed eager just to shoot the breeze, everything from the Texas Rangers' chances of holding on to pitcher Cliff Lee (questionable, in his opinion, if the Yankees decide they want him), to the state of his golf game (he'd like to play to a single-digit handicap sometime in the future - wouldn't we all?), to how often they get to their ranch in Crawford (not as much as he'd like, though they try hardest to spend time there when the wild flowers are in bloom).

It was a regular guy performance extraordinaire, though he wasn't putting on a thing. He seems to relish no longer getting his Presidential Daily Briefing each morning, hearing from his national security and intelligence teams what's on his plate that day. He enjoys a chance to focus on fundraising for his museum, and where he and his wife might go to dinner that night.

After eight of the most stressful years in recent American history, George W. Bush seems content with the low-key. Who can blame him? We've all seen the pictures. Presidents a few months or a year after taking office, his hair full of gray, suitcases forming under each eye. Eight years of waking up to the pressures of keeping the nation safe can do that to a guy.

When I asked him if he sleeps well at night he said "sure do, particularly when I ride my mountain bike hard" that day.

He is proud of his book "Decision Points." A chronicle of crucial decisions he made over the course of his adult life, Mr. Bush wants to set the record straight. He is not a man full of regret or doubt. Even though no weapons of mass destruction were ever found in Iraq, he doesn't second guess the decision to invade, saying it made the world safer and freed a country from the grip of a dictator.

Below is a portion of the interview (watch the video above):

Question: And so the liberation, in your view, justifies everything.

Sometimes you should be judged by the decisions you don't make - in other words the decision to leave him in power. And my judgment would've been a decision that could've created enormous chaos in the world. Now, as one could envision a nuclear arms race between Saddam and Iran, and then they'd have been saying, "Wait a minute, the failure to act created enormous stress."

Question: Did you leave the world in a better place than you found it...

Mr. Bush: Absolutely...when 50 million people who used to live under a brutal tyrant, that's better...I know people are living better on the continent of Africa thanks to the generosity of the American people...Obviously it's gonna take time for history to tell the full story...but yeah I think it's better...

While he will most likely remain a divisive figure in our national conversation, I can tell you this about Mr. Bush - he is content to let history judge him. He has his regrets, the slow response to Hurrican Katrina among them, but is untroubled by many of the choices he made that were unpopular at the time, and remain so today with many Americans.

Mr. Bush's critics will continue to be infuriated by the decisions he made. His supporters will remain steadfast. And after reading the book, chances are slim that very many people will change their membership in either group.